When Kate Hudson moved to London with fiance Matt Bellamy she was in need of a famous friend to show her around town. The actress tells Harper’s Bazaar that one particularly goopy gal stepped up to the plate, and they’re now best friends while she’s abroad. 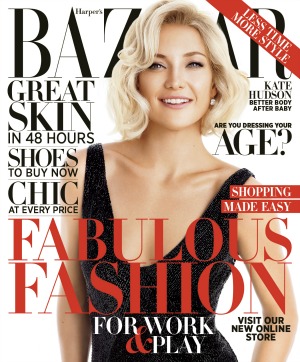 Kate Hudson is loving living both in Los Angeles and London, giving sons Ryder and Bingham the best of both worlds. The transition to life in England was thankfully made easier by a famous friend we all know well, yet some love to despise.

“It’s two very different lifestyles, but I feel really lucky to be able to expose the kids to both,” Kate Hudson told Harper’s Bazaar of life in L.A. and London.

“But it takes planning, and for somebody like me who wants to fly by the seat of my pants all the time… I can be such a gypsy, but with the kids in school, I’m learning how to be more organized.”

Making the transition easier for the actress — soon to be seen on Glee — has been Goop lifestyle maven Gwyneth Paltrow. “She’s been my go-to about where to get things done — grocery shopping, a good mani-pedi, you know, all that.” Kate Hudson gushed of her famous friend.

While some have criticized the mother of Apple and Moses for being out of touch with reality in her picks for Goop’s recommended products, the magazine cover girl believes otherwise. “I look up to Gwyneth and how she has been in her life,” Kate Hudson added. “She’s the real deal.”

Gwyneth Paltrow‘s advice might come in handy even further, if Ms. Hudson ever gets around to planning a wedding with fiancé Matt Bellamy! “We’ll do it eventually, but I want it to be right,” the 33-year-old said. “I don’t want to just do it, you know what I mean?”

The relaxed nature is a change from when the actress and singer first met, however, when she was in a need-to-know-all state of excitement. Kate Hudson admitted, “I Googled him right away!”

Recalling the first time she saw the Muse frontman in concert, she gushed, “I didn’t realize what I was walking into; I was just in awe of his ability and his talent. And then to know him on the other side of it, and how sweet and simple and loving he is. You know how people say that when you meet somebody you love, you feel at home?”

We see how home, be it in London or L.A., is great for Kate Hudson so long as her love is there, too!

Who would you want to be your celebrity gal pal: Gwyneth Paltrow or Kate Hudson?