Chris Brown showed off a new neck tattoo in Las Vegas — and it left many people questioning whether or not it’s of Rihanna. 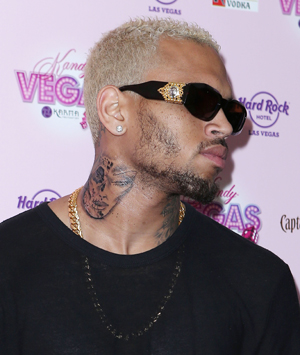 Chris Brown is covered in tattoos, but a new one on his neck is getting some odd stares. Why? It looks a lot — really a lot — like his ex-girlfriend Rihanna with a bruised face and a bloody lip. Take a close look and see what you think.

However, his reps are insisting that it’s actually a sugar skull.

Katy Perry was majorly lovin’ on Rihanna at the VMAs >>

“His tattoo is a sugar skull (associated with the Mexican celebration of the Day of the Dead) and a MAC cosmetics design he saw,” Brown’s rep told ABC News of the super-ugly ink. “It is not Rihanna or an abused woman, as erroneously reported.”

We’d hope not — domestic violence is definitely not something to joke about or take lightly, especially since Brown is the person who made RiRi’s face all bloody and bruised.

The toxic duo have been mending fences lately; they shared a quick kiss during the MTV Video Music Awards, and Rihanna talked about him at length during her recent interview on Oprah’s Next Chapter.

“I lost my best friend,” Rihanna told Oprah of that infamous night in February 2009. “Like everything I knew was switched. Switched in a night. And I couldn’t control that. So I had to deal with that, and that’s not easy for me to understand or interpret. And it’s not easy to interpret on camera, not with the world watching.”

Rihanna vs. Miley Cyrus: Who has the hotter VMAs hair >>

However, she still feels for him.

“I felt protective,” she added to O. “I felt like the only person they hate right now is him. It was a weird, confusing space to be in, because to be as angry — as angry and as hurt and betrayed — I just felt like he made that mistake because he needed help, and who’s gonna help him? Nobody’s gonna say he needs help. Everybody’s gonna say he’s a monster without looking at the source. I was more concerned about him.”

Breezy’s not the only one to get a new tattoo, either; Rihanna just got one on her ribcage to commemorate her late grandmother.

The Buzz – Chris Brown’s New Tat is Not a Rihanna’s Bruised Face
Chris Brown’s Publicist puts a stop to the tattoo rumors, clarifying that it’s not a picture of Rihanna, it’s a symbol for the Dead of the Dead.