Anna Paquin and Stephen Moyer are now parents! They welcomed their twins into the world a bit early, their reps confirmed Tuesday. 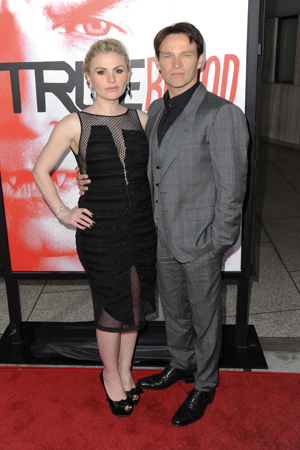 Congratulations are in order for True Blood stars Anna Paquin and Stephen Moyer: They’re now the proud parents of twins!

“We can confirm that Anna Paquin and Stephen Moyer recently welcomed their twins into the world,” their reps told People. “The babies were born a few weeks early, but are in good health and both Mom and Dad are overjoyed.”

Paquin ignited a bit of controversy that same year when she admitted her bisexuality. Some questioned whether or not she was doing it for attention, but the 30-year-old insisted that it was a true thing.

“For me, it’s not really an issue because I’m someone who believes being bisexual is actually a thing,” she continued. “It’s not made up. It’s not a lack of decision. It’s not being greedy or numerous other ignorant things I’ve heard at this point. For a bisexual, it’s not about gender. That’s not the deciding factor for who they’re attracted to.”

“I have a side that’s very nesty, and another that thinks, ‘Let’s lock up the house and go away for five months,” she told Redbook earlier this summer.

We can’t wait to hear more about these sure-to-be edgy kids. Congratulations to the happy couple!