Chad “Ochocinco” Johnson’s refusal to sign papers to move forward with his blink-and-you-miss-it-quick divorce to reality TV star Evelyn Lozada is just the latest in a series of reported desperate attempts to keep the wife he allegedly head-butted. 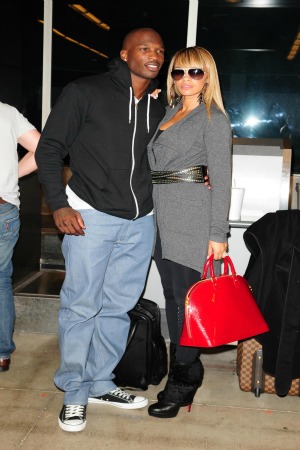 Within days of (ex) NFL star Chad (formerly known as “Ochocinco”) Johnson getting inked with a likeness of wife Evelyn Lozada on the side of his leg, TMZ claims the troubled athlete refuses to grant Lozada the divorce she reportedly so desperately wants.

The gossip site notes that Johnson refuses to sign the divorce papers his wife of 45 days filed last month.

Several media outlets note that in Florida, Lozada doesn’t need her husband’s signature to move forward with the split. As long as the judge OKs it, she’s set.

Lozada filed for divorce three days after Johnson was arrested for allegedly head-butting her during an argument over a condom receipt the Basketball Wives star found.

The prolific Twitter user has expressed regret for his actions, going so far as to post on his short “bio” on the social networking site that he’s “not perfect” and “not a role model,” and urging fans to not “feel bad” for him.

“I made the bed now I gotta lay n it,” he wrote in late August.

But it appears all this introspection — not to mention the tat of Evelyn’s face on his leg — are too little too late… if ever there is a good time to get anyone’s pic inked forever on your skin.

Those close to Evelyn, via TMZ, are saying under no circumstances will she take Chad back.