In her second novel, P. A. O’Reilly introduces us to Loretta Boskovic, a single mother, friend, and local activist who sparks up her very down-to-earth life with dreams of romance and freedom. 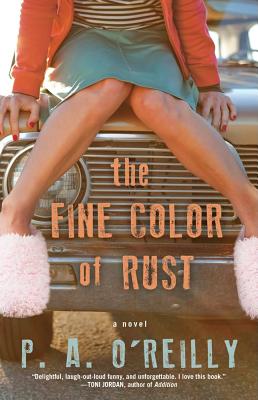 Loretta Boskovic has been on her own since her husband up and left her and their children for greener
pastures. It’s not that Loretta doesn’t ever think about moving to the city, but living in Gunapan, on the edge of the Australian bush, has its advantages. Where else would she have a best friend and neighbor who gave her goats when she needed a lawnmower? But countering Loretta’s support system is the small-town problem of everyone knowing her business.

Single parenthood is not easy, especially with a preteen daughter in the house. Loretta struggles with raising her kids, juggling her budget, and keeping her car running. Sure she has some good friends, but she can barely remember the last time she was on a date.

When Loretta discovers her inner activist and starts rallying to save the local primary school and then to investigate a new town development project, her world truly starts to get crazy. Tempers flair over social issues and hearts beat wildly over a couple of new guys in town. Loretta not only ends up facing a possible arrest, but thinks about adjusting her ongoing fantasy of being rescued by a knight in shining… motorcycle blacks.

P. A. O’Reilly’s The Fine Color of Rust is a novel about regular people trying to get by in trying times and circumstances. On one level, the book is smart, funny women’s fiction that focuses on romance (or the lack thereof), motherhood and friendship. But on another level, The Fine Color of Rust explores social issues, standing up for one’s beliefs, and the meaning of community. The interplay between these two faces of the story help make the book a must-read choice for September.

O’Reilly’s excellent sense of setting as a reflection of Loretta’s circumstances is another strength of the novel. Gunapan is not quite a bush town, but neither is it the city. It’s in limbo, just as Loretta is: She’s single, but not free, wishing for romance, but unable to justify time away from her kids.

The Fine Color of Rust is a novel with wide appeal. Whether you’re looking for a light weekend read peppered with humor and wonderfully realistic characters or want to learn about small-town life and social issues in rural Australia, P. A. O’Reilly’s second novel will fill the bill.