This spicy comedy will have you laughing out loud if not peeing in your pants (in a good way)! Ellen Barkin graces television audiences with her sharp-edged tongue and cutie Georgia King reminds us of Suzanne Summers, but for the 21st century. 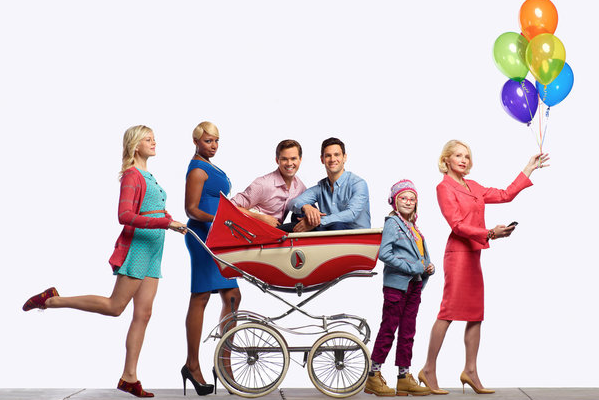 What sitcom doesn’t have a gay couple these days? The new twist here is that David (Justin Bartha) and Bryan (Andrew Rannells) are hilariously self-absorbed and materialistic. Bryan breaks the news to his boyfriend that he wants a baby by saying, “I want us to have baby clothes. And a baby to wear them.” Fashion comes first in their world.

Obviously they need help in making a baby and after one possible surrogate threatens to smoke, drink and eat raw fish if they don’t agree to buy her a new BMW, they find Goldie (Georgia King), a bright-eyed mom who’s looking to change her life.

Goldie had her own daughter when she was just 15 and now, working as a waitress in a dirndl, she has limited options. When she catches her loser boyfriend having sex with an Asian woman wearing a Tokyo-styled, Lolita-esq teddy, she decides to get her daughter and take off.

It isn’t long, however, before Goldie’s grandmother Jane (Ellen Barkin) finds her and rips her a new one. Controlling, racist and anti-gay, Jane is a delightfully politically incorrect role model for this group of iPadded millennials. When speaking about her own teen pregnancy, she tells her granddaughter, “I thought your mother was a fibroid tumor. By the time I figured it out, I was screwed.” No waxing nostalgic for her!

Needless to say, Jane isn’t quite supportive when she finds out Goldie is planning on being a surrogate mother for David and Bryan. But Goldie dreams of being a lawyer and wearing tailored suits like on The Good Wife and doesn’t back down.

Georgia King as Goldie proves to be a true comedic gem. Hailing from England, this actress walks the line between ditz and irony, making us root for her and laugh at her foolishness at the same time. Enjoy this witty new comedy that pushes the envelope — yay NBC!