Elvis Presley fans can’t wait to get their hands on a piece of the King’s memorabilia. A recent auction revealed there’s a cutoff limit to their love for the late legend, however, after a pair of dirty drawers failed to perform. 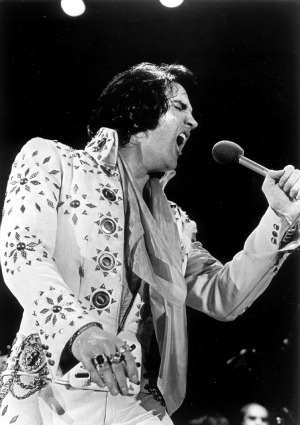 Elvis Presley fans may have die-hard love for the King of Rock ‘n’ Roll, but a recent auction has proven their pocketbooks have a limit when it comes to his unmentionables.

Boasting never-having-been-washed since they were worn during a 1977 performance underneath one of Elvis Presley‘s white jumpsuits, the underwear up for auction is said to include a “suspicious yellow stain” in the pelvis-thrusting region.

Fans flock to Graceland for 35th anniversary of Elvis’ death >>

While the gross-out garment did garner $5,000 in bids, the dirty drawers did not meet the seller’s reserve price of $7,000, and therefore went unsold.

There’s still hope then, for the serious fans out there, to someday take home a “Way Down” piece of seriously questionable memorabilia!

“It was a really exciting atmosphere in the room, we had 300 people and there was bidding online and on the telephone across the world,” said Karen Fairweather, the Omega Auction House owner, reports the BBC. “You could hear a pin drop when it sold for that price.”

Applause reportedly filled the room when an American man, who asked not to be identified, made the final bid.

The Christian Post reports Elvis’ Bible is leather-bound with gold lettering and is 1,600 pages long, in very fragile condition. All the pages are intact and include 20 to 30 annotations with sections and verses underlined, presumably by Elvis himself.

Before auction, the Bible was estimated to fetch a respectable, though pale in comparison, $31,000.

While the King’s legacy deservedly lives on, there’s something unsettling about seeing his dirty underwear up for auction — right?