Lady Gaga would like your attention, please! The wedding dress-wearing singer seems to be trying to cause a stir with her fashion choices in London, but it’s that dang meat dress people are still talking about. Two years post-VMAs, the creation lives on! 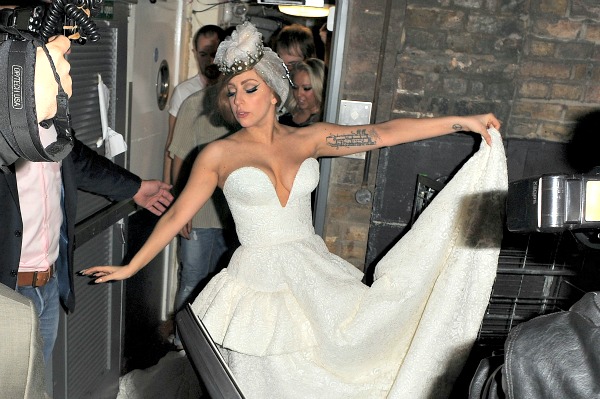 Lady Gaga may make for a beautiful, boobiful bride, but all that white can’t compare with the meat dress of yesteryear. Wonder what’s happened to the 2010 creation that shocked fans and had stomachs churning? It lives on — though it’s a bit jerkier than before.

London may be lucky to have Lady Gaga dolled up, fit to marry and out on the town, but it’s Washington, D.C., that is proud owner to her most famous frock. All 25 pounds of Argentinian beef that made up the 2010 MTV VMAs creation is now on display at the National Museum of Women In The Arts.

Time has not been particularly kind to Lady Gaga’s meat dress, however. KPLR reports the garment has been dried and treated with chemicals, turning it into more of a meat-jerky creation than its revoltingly raw, original form.

René Marsh, who reported on the museum’s set-up, said: “The meat dress and boots the pop singer wore were painted red to restore their color, for Gaga it wasn’t about raw fashion it was a political statement… if you don’t stand up for what you believe in, that is speaking out against, ‘don’t ask, don’t tell,’ then you’re reduced to a piece of meat.”

Also on display in D.C. through the end of the year are Rihanna’s studded bustier and Taylor Swift’s guitar — slightly easier on the eyes for music fans with a sensitive stomach!

How much would you pay to see Lady Gaga’s meat dress in a museum?