Someone’s getting married on Gossip Girl. The latest trailer shows a top-secret wedding — and the gossip gang wasn’t invited. But since when has something like no invitations stopped them from crashing a party? 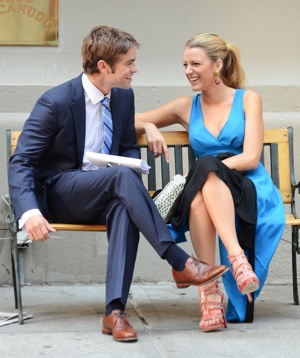 Don’t let the smiles fool you: Gossip Girl is bringing the drama. A lot has changed since the last time we saw our favorite Upper East Siders. One person in particular has undergone a huge transformation.

Gossip Girl set to kick off sixth and final season >>

In the latest promo for the sixth season premiere, Chuck, Blair and the rest of the gang are crashing a party. Whose party? It’s Serena’s — or should we say Sabrina’s?

We don’t know the specifics, but it looks like Serena’s getting hitched. And her groom is none other than 7th Heaven alum Barry Watson. She claims to want a fresh start, but her friends aren’t buying it.

Isn’t it ironic that this promo was released a day after Blake Lively‘s real-life wedding to Ryan Reynolds? Talk about good timing.

Serena isn’t the only person getting some loving. Chuck and Blair are back to their old ways. They’re hitting the sheets and causing trouble. So where does that leave Dan? Judging from the trailer, he’s a little bitter. Both Blair and Serena slap him after he spews a few saucy comments. Can they blame the guy? He’s been emotionally used and abused. Dan’s not the best company right now.

Also, watch out for the return of Michelle Trachtenberg‘s Georgina. She lays down the law and declares everyone must be exposed!

Check out the preview below: