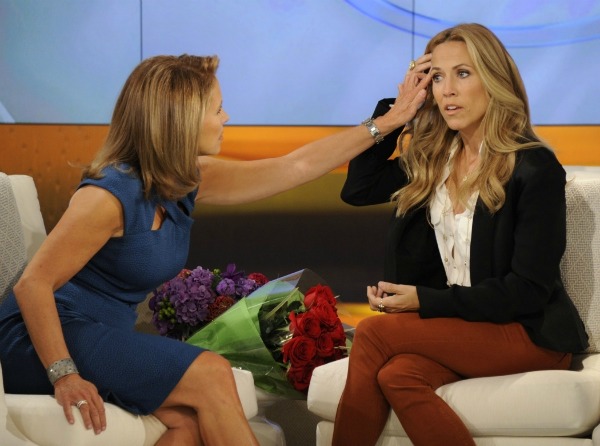 Today felt like Katie Couric‘s first day of school, and she did not disappoint. Two friends helped her launch her new daytime talk show Katie. Jessica Simpson appeared for her first televised interview since giving birth to Maxwell Drew in May.

“Motherhood is a dream,” said the singer. “It really is absolutely amazing.”

She also spoke about the pressure to lose weight after the birth and signing on as a spokeswoman for Weight Watchers.

“I really didn’t want it to be about my weight because I know that everybody has their weight and has their issues,” she said. “I really wanted it to be about the spirit of Weight Watchers and how I was feeling, and I wanted to talk directly to people so, um, I didn’t want the like big body reveal moment. It’s not really who I am, and Weight Watchers was on board with that, thankfully.”

Simpson said she has lost than 40 pounds and has 10 pounds to go to complete her goal.

The singer and actress said she and Eric Johnson, Drew’s father, haven’t had time to plan their wedding since their daughter takes up most of their time, but that he loves being a dad.

“People call him the best dad in the world. Even my dad calls him that,” she said. “He is an incredible father, he can do everything. He can change every diaper, and he can have her all day long and I don’t have to stress about it.”

Sheryl Crow also joined Couric on her inaugural show. The big news in the singer’s life is her recent diagnosis of a benign brain tumor. Crow has her theory about how she got the tumor.

“I say it’s in my cell phone area and there are no doctors that will confirm that,” she told Couric. “But I do have the theory that… it’s possible that it’s related to that because early, early days when I was promoting my first record I did hours of phoners on the old archaic cell phones.”

Couric asked about her ex-fiance Lance Armstrong, who has had a tough summer.

“Well, I haven’t seen Lance in a few years. But it was hard, he’s somebody I really care about. I rely on his foundation,” said Crow. “I know how hard he worked to win those titles and it was hard to watch. You know, I, felt bad. I felt bad for him.”

This week, Couric will welcome Aimee Mann, Heidi Klum and Jennifer Lopez. You can check out her website for show times and channel in your area.