Jennifer Lawrence beats out Anne Hathaway and Angelina Jolie for role in Silver Linings Playbook. The 22-year-old stunning actress is now officially in A-List territory with her Oscar-worthy performance. 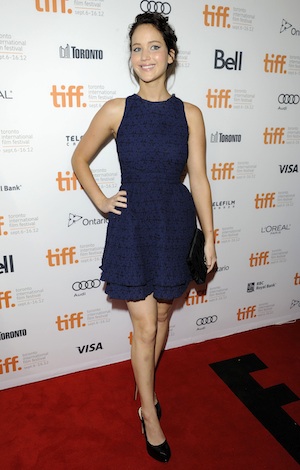 IMDB describes the plot of the film as: “After a sting in a mental institution, former teacher Pat Solitano (Bradley Cooper) moves back in with his parents and tries to reconcile with his ex-wife (Veronica, played by Julia Stiles). Things get more challenging when Pat meets Tiffany (Jennifer Lawrence), a mysterious girl with problems of her own.”

Robert De Niro also stars in the film as Pat Solitano’s father. Silver Linings Playbook is directed by David O. Russell, who is perhaps best known for his directorial role in critically acclaimed films such as The Fighter (2010) and I Heart Huckabees (2004).

The film is garnering early Oscar buzz after its tremendous reception at the Toronto International Film Festival. Perhaps most notable for Jennifer Lawrence is her ability to land the role of Tiffany despite heavy director favorites such as Anne Hathaway and Angelina Jolie.

Movie Talk reports Jennifer Lawrence auditioned late and over video-chat program Skype but had a profound effect on casting. Russell told The Hollywood Reporter on Sunday he could not conceive of casting Hathaway or Jolie in the role of Tiffany after seeing Lawrence’s audition.

“We had our choice of a lot of terrific actresses, and Jennifer came in at the 11th hour and just stole it,” Russell said. “She Skyped from her parents’ house in Louisville (Kentucky). We went, ‘Oh my God, who’s this person?’ We didn’t know she had all that in her.”

Silver Linings Playbook was also a dream choice for Jennifer Lawrence. At a press conference during the Toronto Film Festival Lawrence, she said Russell is one of her favorite directors and that she absolutely would not pass up the chance to work with him on a project.

“He’s really my favorite director since I started watching movies,” she said. “That was an easy decision (to do the film). I really wanted to work with him.”