Writer/director Paul Thomas Anderson (Boogie Nights, There Will Be Blood) tells the story of an eloquent scam artist who dabbles in the mystical realm and takes a broken WWII vet under his power-thirsty wing. Philip Seymour Hoffman and Joaquin Phoenix take on the roles of their lives in this superbly shot film. 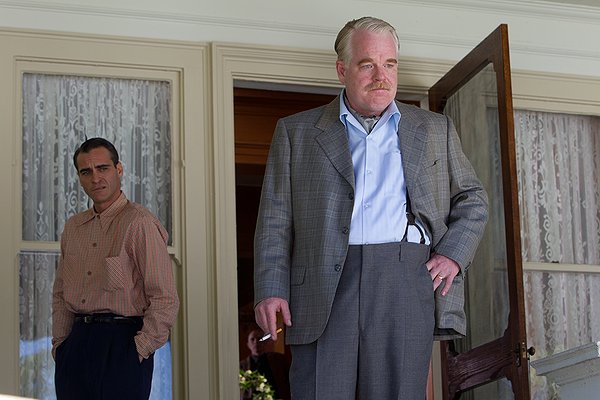 We meet Freddie (Joaquin Phoenix), a sailor in the Navy, on the beach somewhere in the South Seas during World War II. He seems a bit unhinged as he pretends to make love to a sand sculpture that looks like an anatomically correct woman. Like most things Freddie does, it is unsettling to watch.

After the war, Freddie is diagnosed with a nervous disorder and drifts from place to place, all while concocting a type of moonshine made with secret ingredients such as paint thinner. He’s a drunk — there is no other way to say it. He’s so unruly, dastardly, and out-of-control, only a near-saint could take pity on him.

In one of his blackout bouts, he ends up on a cruise ship helmed by a man named Lancaster Dodd (Philip Seymour Hoffman). A diabolical man, it’s unclear whether Dodd invites Freddie to work on the boat to help Freddie or serve a more sinister purpose. Probably a bit of both.

Freddie learns that Dodd is leading a movement to help people understand their place in the universe — humans are not animals, but have lived in various vessels for over millions of years — and understand themselves, as in why they can’t get back to their original state of perfection. 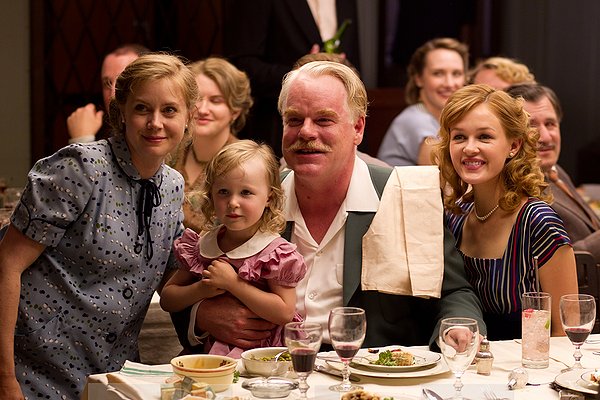 Whether or not that is the philosophy of Scientology, I couldn’t tell you. But Lancaster Dodd does have many resemblances to L. Ron Hubbard, so you may draw your own conclusions. What is clear is that Dodd says some pretty ludicrous things and people listen. And they give him lots of money to keep saying them.

This movie has many strengths, including Hoffman and Phoenix’s performances. Hoffman is eloquent and seductive in his ability to give complete focus to one person and appear to want nothing more than to help them. All the while it is clear he’s inventing on the fly the strange auditing processes all his subjects must undergo. He’s so charming, you want to trust him. He genuinely seems like he knows the answers to life’s biggest questions. He probably would have gone into politics, if there had been any money in it. 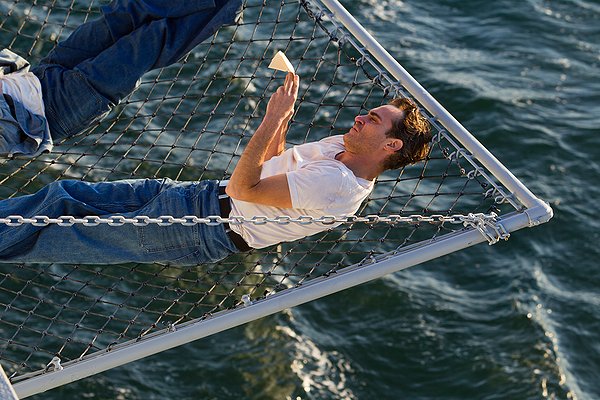 Phoenix transforms himself physically into a hunched-over crustacean who speaks only from one side of his mouth. His eyes dart in a furtive way that may or may not be from the booze. His power, volatility, and utter brokenness make his performance riveting and sometimes scary.

Amy Adams plays Dodd’s wife Mary Sue with frightening clarity. She knows exactly who her man is and how to master him by playing the docile female in public. She also shows incredible power and restraint in this gutsy performance.

Shot in 70 mm, this film is visually triumphant, especially in the days where so much video is viewed on tiny screens. Seeing The Master on a big screen will no doubt remind you why we come to the cinema in the first place: to watch art.

Bottom line: This film is a fascinating character study and has three of the best performances so far this year. The story isn’t exactly uplifting but certainly thought-provoking and reflective. What it lacks in story, it makes up for in glorious 70 mm film.