If Anderson Cooper has always been gay, what made him decide to finally “come out” this summer? With a blush and trademark giggle, the man of the hour has explained his reasoning to Anderson Live show fans. 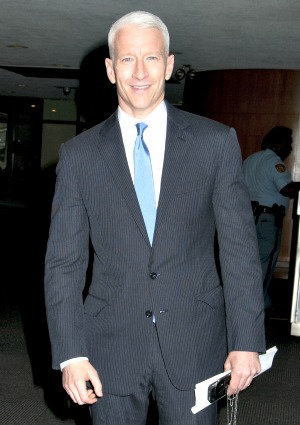 Anderson Cooper has kicked off the second season of Anderson Live with his own coming out story. Thanks to a not-so-innocent line of inquiry from guest co-host Kristin Chenoweth, the man many accused of admitting to be gay as a ratings ploy has explained himself.

Since coming out in an email to political blogger in Andrew Sullivan in July, Anderson Cooper has had quite the summer. When asked about what he’s been up to by Kristin Chenoweth, the 45-year-old host replied with a light Cooper-tastic giggle, “Now I’m blushing and I’m getting nervous.”

“I came out in high school,” he went on to explain of the timeline of events. “I told my friends, I told my family. I’ve always been out to my co-workers and stuff. It’s just not something I talked about publicly, because as a reporter, I didn’t think it was appropriate. It didn’t seem like part of my job.”

Anderson Cooper continued, “It just got to the point where — I’ve been torn for a long time between a desire as a reporter to just do my job and be known as a reporter — and at the same time I do think visibility is important. I do think that the tide of history only moves forward when everyone is fully visible. I didn’t want to send a message that there was anything I was ashamed about or unhappy about or not comfortable with. That was the main thing for me.”

Are Anderson Cooper and Andy Cohen an item? >>

“I appreciate all the support I got and all the encouragement,” the silver fox added. “I am the same person I always was, I do the job just the same way.”

Check out Anderson Cooper’s coming out explanation below!