Kim Kardashian compares her plight to that of a teenage girl with cancer. Yes, seriously. 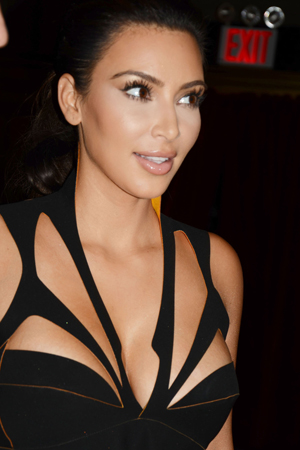 Being famous is like, almost the exact same as having cancer. Say what? Yep, that’s the ridiculously inappropriate analogy Kim Kardashian made in a new interview with the U.K. Guardian. In the interview, the reality star compares the drama around her divorce from Kris Humphries to an 18-year-old girl’s fight with cancer.

“But I think that, with any decisions in life [brace yourselves], like, I spoke to a girl today who had cancer and we were talking about how this is such a hard thing for her, but it taught her a big lesson on who her friends are and so much about life. She’s 18. And I was like, that’s how I feel.”

That’s right, Kardashian’s life is so pampered that being embarrassed by her 72-day divorce is just like fighting a deadly illness. Her vapid, clueless quotes don’t stop there, though: The 31-year-old admits she loves fame and compares Keeping Up with the Kardashians to iconic shows of days gone by.

“When I hear people say [what are you famous for?], I want to say, what are you talking about?” she said. “I have a hit TV show. We’ve shot more episodes than I Love Lucy! We’ve been on the air longer than The Andy Griffith Show! I mean, these are iconic shows, so it blows my mind when people say that.”

It takes talent to be on reality TV, guys.

“But to be able to open up your life like that and to be so… if everyone could do it, everyone would,” she added. “It doesn’t make sense to me.”

And as for that ill-fated marriage? She says she won’t get married on television again. Or, maybe she will. Thinking is hard!

“I would definitely do it differently. Just all the scrutiny that I got. You don’t plan to go through all of that willingly. For money,” Kim added. “That’s just not what a sane person would do. So. Would I get married on TV again? No.”

So, Kim Kardashian walks into a swingers party… >>

“Well, I guess you never say never. Because who knows? So many other people I know have gotten married on TV and it has worked out amazing for them,” she said. “William and Kate got married on TV.”

And that, friends, is a look inside Kim Kardashian’s mind.