The New Normal is almost here! The comedy makes its big debut Tuesday night, and NBC is giving it one final push. The network has released an extended preview that gives us a closer look at this new family. 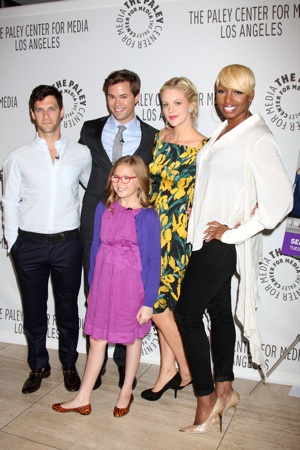 “A family is a family. Love is love.” That’s the theme of Ryan Murphy and Allison Adler’s comedy The New Normal. After a summer of positive and negative buzz, it’s time to put up or shut up.

We’re just one day away from The New Normal’s series premiere. And NBC has released an extended promo that taps into the show’s emotional center. There are plenty of hilarious moments, as well as a few tearjerkers.

The New Normal centers on a same-sex couple who are looking to start a family. They hire a single mom to be their surrogate — but are unprepared for the baggage she brings. The woman comes complete with a quick-witted daughter and a prejudiced mother.

The New Normal: Why is everyone acting like it’s the first gay TV show? >>

The expectant couple is played by Justin Bartha (The Hangover) and Andrew Rannells (The Book of Mormon), while their surrogate is portrayed by British actress Georgia King (The Duchess).

NeNe Leakes on Housewives future: “I have 3 shows” >>

The cast is rounded out with Ellen Barkin (Ocean’s Thirteen), NeNe Leakes (The Real Housewives of Atlanta) and newcomer BeBe Wood (30 Rock). It will air immediately after Matthew Perry‘s new comedy, Go On, which centers on a sportcaster grieving the loss of his wife. It seems like an odd combination, but we think it can work.

Check out the extended preview below: