A man reportedly filed a police report after an incident at a Hollywood hotel Saturday night — it involved Cyrus and her fiance, Liam Hemsworth. 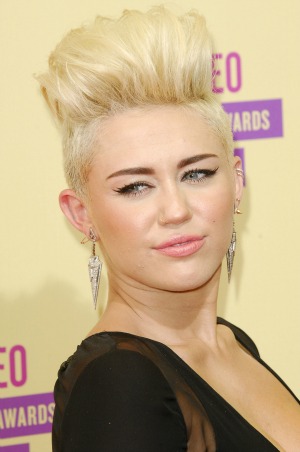 Miley Cyrus had quite the weekend. Sunday morning, a man tried to gain access to her house with a pair of scissors, saying he was her husband. The singer was away from her home at the time.

But she may have started her own battle when she was out with her fiance on Saturday. According to Perez Hilton, a man filed a police report Sunday morning for criminal battery against Cyrus, claiming she had punched him.

According to Hilton, the man is claiming that on Saturday night, he and his friends were at Beacher’s Madhouse at the Roosevelt Hotel in Hollywood at the same time as the Cyrus party. The man is saying someone in his group “may” have bumped into Liam Hemsworth‘s chair.

“Apparently words were exchanged and things got heated, fast, to a point where physical violence seemed imminent,” said Hilton on his website. “Miley supposedly got in between Liam and the ‘victim’ to break them apart, and then allegedly hit the man in question, in the face.”

A witness did confirm there was some sort of argument between the two parties, but the witness did not see things get physical, so that makes this story a little hard to believe. The man did file a police report, but there has been no news of Cyrus being charged, so the police may be looking into it. Or it may have been dismissed altogether. Hilton is also saying the man have made up the story, since it’s not the first time a person has tried to “create a money-making mountain out of a celebrity sighting molehill.”

The man who attempted to break into Cyrus’ home Saturday may have been looking for attention also. It’s not the first time someone has believed they were involved with her — it also happened in 2009 when she was only 16.