Jessica Simpson is almost back to her pre-baby weight! The singer and reality star told Katie Couric that she’s on the road to health, even if it’s not always easy. 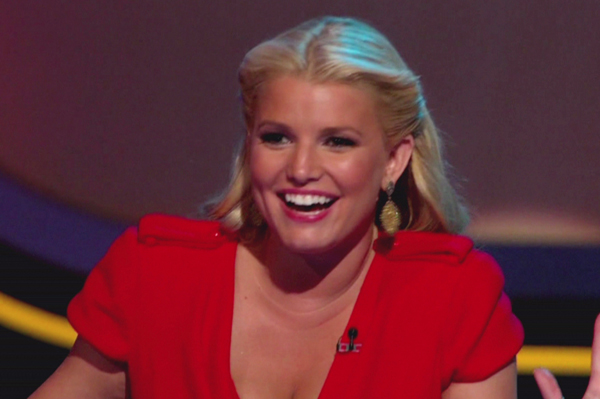 Jessica Simpson was pretty evasive last week when it came to discussing exactly how much weight she’s lost since giving birth to daughter Maxwell Drew Johnson in May. Not anymore! The singer appeared on the premiere of Katie Couric’s new ABC talk show Katie to talk about her progress with Weight Watchers. The result? She says she’s lost 40 pounds!

Pretty impressive! However, it’s not as simple as other Hollywood moms make it seem.

“I set small goals for myself. I’ve lost weight every week, thank God, but I’ve worked really hard. I have to shoot a new season of Fashion Star,” she told Couric, adding that she’s about 10 pounds away from her pre-pregnancy weight.

“My doctors told me [my pregnancy weight] was a lot of water, and when my water broke… All the weight did not come out with the baby. I had to stay focused on my diet. I want to be as healthy as I can because I’m a mom now,” she said, adding that she’s learning to love fish and other healthy grub.

“The only fish I ever ate was a fish stick. Now I’m trying to eat fish.”

Another part of her healthy outlook is avoiding negativity that’s posted about her online and in magazines.

“I definitely don’t pick up the magazines. I definitely don’t Google my name. I try to avoid it completely. But I subconsciously know the talk is going on,” she said. Every day it’s a struggle for me. Weight Watchers is not intimidating. It’s not a diet. It’s a lifestyle.

“I have to separate myself from the world’s expectations,” she added. “I have to look inside myself. I want to be a role model.”