Prince Harry is back in Afghanistan for another tour of duty. However, he’s working with a target on his head, thanks to a threat from the Taliban. 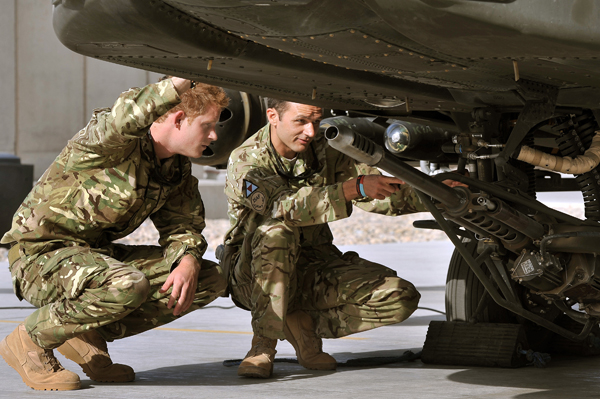 Prince Harry is back in Afghanistan as an Apache helicopter pilot — and he’s not that safe. The Taliban in Afghanistan has declared its own personal war on the 28-year-old prince.

“We are using all our strength to get rid of him, either by killing or kidnapping,” Taliban rep Zabihullah Mujahid told Reuters on Monday.

“We have informed our commanders in Helmand to do whatever they can to eliminate him,” he added of the mission they call “Harry Operations.”

Did Prince Harry ride the white pony in Vegas? >>

The threat is real, but we highly doubt this is news to Captain Wales and his superiors in the British Royal Army — his nickname is “the bullet magnet,” after all. Harry served in Afghanistan in 2007 but was pulled out of service when his whereabouts were leaked to the media. He’s been pulling to get back since.

“At the end of the day, I’ve done my training. It’s cost the army money to train me,” Harry told CBS News in an interview this year. “If they didn’t think that they could get me out there again, then they wouldn’t have put me through this training. It’s as simple as that.”

Plus, he wants to serve his country.

“I’ve served my country. I enjoyed it because I was with my friends. And, you know, everyone has a part to play,” he added.

“You can’t train people and then not put them into the role they need to play. For me personally, as I said, I want to serve my country. I’ve done it once, and I’m still in the Army, I feel as though I should get the opportunity to do it again.”

He’s getting his wish — we just hope it’s not his last.

Should Prince Harry be back in Afghanistan with the threats against his life?