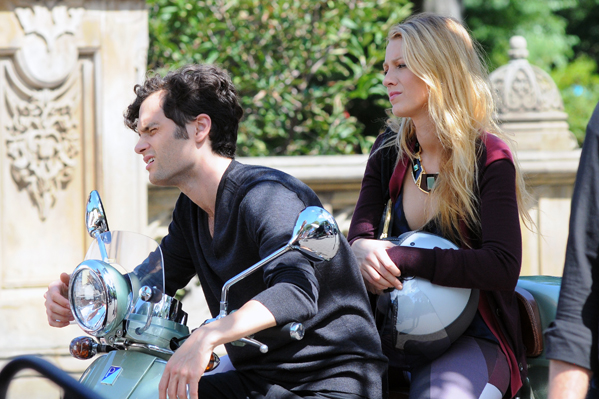 We were surprised to learn that Blake Lively and her Green Lantern co-star Ryan Reynolds made their relationship official Sunday with a wedding in South Carolina. However, we figured those in her inner circle — like her Gossip Girl co-stars — would know about impending nuptials.

Not so, says co-star (and ex-boyfriend) Penn Badgley: He learned about Lively’s new status as a missus like we did.

“I actually didn’t know until last night, but I think it’s fantastic,” he told People on Monday. “I couldn’t be happier for her.”

Kind of a surprising reaction, given that Lively and Badgley dated for three years. However, both sides seemed to stay friendly after the 2010 breakup.

“Every relationship you have, you’re learning and growing and taking something from that,” Lively told Glamour in 2011. “So for me, it’s never been too dramatic of a thing when something ends.”

Badgley expressed similar sentiments in an interview with JustJared Jr. in 2010.

“Women have a different path to cut out for themselves and they have different hurdles to leap and she’s doing it with such grace and such a wonderful way that it’s a really amazing thing to be a part of,” he gushed of his ex.

Sounds like two years hasn’t dampened his enthusiasm for his 25-year-old ex, despite not being invited to the intimate nuptials at Boone Hall Plantation in Mt. Pleasant, South Carolina.

“I’m so happy for her,” he told People on Monday. “I think it’s everything that it should be.”

Do you think Penn Badgley is being sincere about his good wishes for ex-girlfriend Blake Lively?