More Go On goodies are on the horizon. Tomorrow, NBC’s newest sitcom debuts in its official time slot. But before the big premiere, we’ve got three new clips from the Matthew Perry comedy. 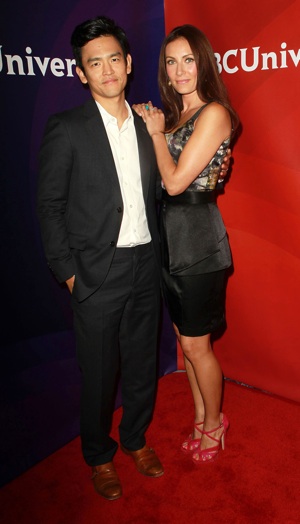 Everyone deals with grief in their own way, and the folks from NBC’s Go On use humor and hijinks to heal. The new sitcom starring Matthew Perry takes us inside a therapy group that moves towards recovery one awkward laugh at a time.

Matthew Perry is back for NBC’s new series Go On >>

Go On centers on popular sportscaster Ryan King (Perry), who’s just lost his wife. At his boss’s request, he’s forced to enroll in mandatory grief counseling where he encounters a variety of strong personalities.

NBC’s Go On and Guys with Kids talk character quirks >>

NBC has released three new clips from the series that give us a taste of its hybrid humor.

In “A Missing Treasure,” Ryan and Steven (John Cho) meet with George (Bill Cobbs) to discuss his most prized possession. George is an older gentleman who doesn’t have the best eyesight. When he attempts to show the guys a vintage basketball, they quickly realize it’s missing, and George is none the wiser.

“Time to Take Action” gives us a peek inside a therapy session. Members of the group strongly encourage Sonia (Sarah Baker) to dump her no-good boyfriend. Will she take their advice?

“You know what might be fun?” is the most revealing clip of the bunch. It’s hilarious, yet sad at the same time. It features Ryan at work, shortly after his wife’s death. Instead of taking time off to grieve, he spends his time driving everyone insane. There’s only so much chair-racing, office hockey and taste-testing you can do on the clock.

Will you be watching Go On?