Despite the particularly low numbers at the box office this past weekend, The Possession managed to hang onto the No. 1 spot two weeks in a row. 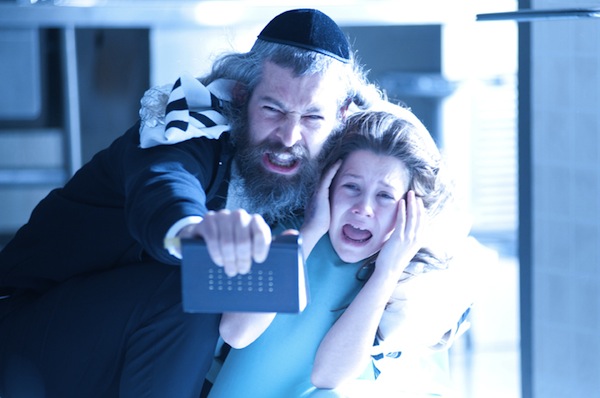 Where’s the love, moviegoers? Not at the box office this weekend. According to reports from Deadline Hollywood, this past weekend was the worst in movie-going history in the past few years.

The fright flick, The Possession, from director Sam Raimi, proved to be the best weekend pick as it maintained its No. 1 status two weeks in a row. It grossed $9.8 million in returns. The film tells the story of a girl who buys a box at a garage sale and gets a whole lot more than she bargained for.

The Possession takes No. 1 spot on weak Labor Day >>

Hot guy alert! Shia LeBeouf, Guy Pearce and Tom Hardy star in this period piece about Prohibition. Critics tout the film as violent and bloody, but we couldn’t stop looking at the gorgeous mugs. Lawless earned $5.8 million in box office returns this past weekend.

Bradley Cooper stars in this romantic thriller about a man who steals a book and claims it as his own. The Words earned an estimated $4.9 million this week at No. 3, a slow start for a film starring The Hangover’s leading man. While we normally run to the box office for anything BCoop does, this one might be best saved for a rental. Sorry, Bradley.

Movie review: Truth or fiction — which would you choose? >>

Tough guys unite! The sequel to a film about shooting, fighting and yelling still has pull with audiences after four weeks at the box office. The action thriller earned $4.8 million in returns bringing it at No. 4 this week.

The über adorable kids zombie flick about a boy who sees ghosts ranked No. 5 this week with $4.3 million at the box office. If you haven’t seen this stop-motion animation yet, get to the theater while it’s out. It’s well worth the treat.

The most recent hot spy to send the CIA on a wild goose chase is Hurt Locker’s Jeremy Renner. No Matt Damon needed when this stud gets shirtless in the latest addition to the Bourne spy series. The film made an estimated $4.2 million in box office returns, bringing it in at a solid No. 6.

Movie review: The spy who I wished shagged me is in The Bourne Legacy >>

The Odd Life of
Timothy Green

The Disney flick staring Jennifer Garner warms hearts with its quirky approach to the ever-confusing role of parenting. When a couple can’t have a baby of their own, a magical wish grants them a child — in the form of an 11-year-old boy. The film grossed $4 million, bringing it in at No. 7.

Movie review: The art of organic parenting in The Odd Life of Timothy Green >>

The funny guy take on politics is one you can’t miss if you’re a fan of Zach Galifianakis or Will Ferrell. The story of two idiots running for office definitely brings the belly laughs. The film earned an estimated $3.5 million for its fifth week at the box office.

The conservative documentary about President Barack Obama’s childhood and political career has grossed more than $26.3 million in box office returns since it was released nine weeks ago. This doc is now the No. 2 highest-grossing documentary of all time, surpassing four of Michael Moore’s famous films.

The finale to the Christian Bale Batman series has been bringing audiences to their knees — and the theaters, apparently. The dark take on the caped crusader’s struggle to keep Gotham safe earned $3.4 million at the box office this past weekend, giving it a solid place on the Top 10 list.