The actress went all out for Thursday night’s MTV Video Music Awards, hoping to take home a boy-bander. But in real life, the actress’s career is really taking off. 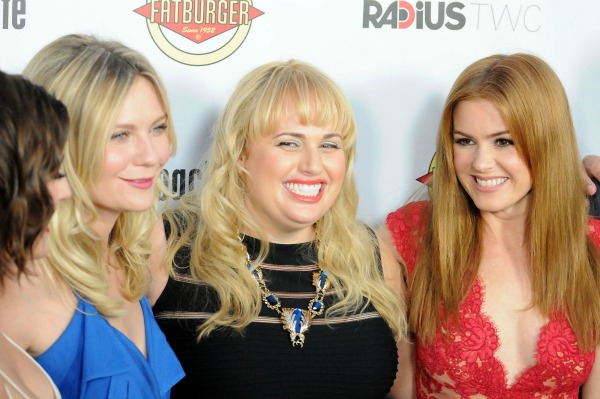 Rebel Wilson may be the ultimate comedic actress. She’s willing to go out on a limb (or maybe out on a ledge) for her comedy. And Thursday night was no different. Wilson presented the award for Best Female Video at the MTV Video Music Awards with The Wanted and may have made each one of them blush.

“The actress sent jaws dropping at the Staples Center in Los Angeles when she stepped out in an airbrushed T-shirt with a silhouette of a shapely bikini girl,” said the U.K. Daily Mail. “But perhaps most red-faced were British-Irish boy band The Wanted, after she propositioned the singers to let her take them home.”

Wilson came out on stage holding a strategically placed bag of chips. Then she lifted that bag to reveal that her painted-on bikini was (barely) covering up a body that, well, desperately needed a shave. She told the band she wouldn’t need to choose which one she would take home because she could choose them all. And then, “everybody wins.”

The Bridesmaids actress signed on as the Australian face of Jenny Craig last year and has been losing weight ever since.

“She tipped the scales at 234 lbs but has now dropped 33 lbs. Showing off her slimmer figure on Jimmy Kimmel Live! last month, she said she wants to lose another 22 lbs to reach her target,” said the Daily Mail.

She also has a new movie coming out soon. Bachelorette is the story of women growing up and seeing their friends get married.

“Writer-director Leslye Headland cast the comedienne as the straight woman in the dark comedy,” said the Daily Mail. “Wilson plays Becky, a sweet, beaming bride — the first of her friends to marry. Kirsten Dunst, Isla Fisher and Lizzy Caplan are her troubled clique of friends whose hard-partying antics threaten to ruin Becky’s big day.”

She is also working on a TV pilot with Conan O’Brien, which she will star in. Bachelorette is in theaters now.