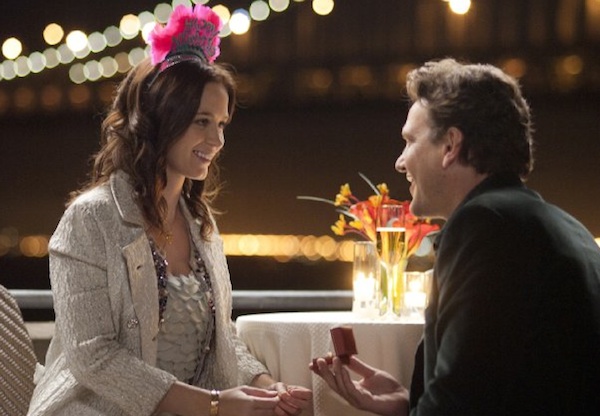 No. 1 — The Five-Year Engagement

This adorable romantic comedy staring Jason Segel and Emily Blunt is about a couple who wants to tie the knot but can’t seem to figure out exactly when to do it. After putting off the wedding one too many times, they are forced to face the inevitable question… Do they want to get married at all?

Movie review: The Five-Year Engagement is a long road to a happy ending >>

We heart tough guys! Jason Statham and Catherine Chan star in this action flick about the protection of a 12-year-old girl in the New York City underworld. The film is directed by Boaz Yakin of Remember the Titans and Uptown Girls fame. Action, martial arts and adrenaline make for a wild ride.

You know you’re dying to see what could possibly happen in a third Piranha movie, no matter how cheesy it might be. The killer fish is back — this time with a vengeance for spring breakers. Arrggg!

Rotten Tomatoes: No rating yet

This quirky indie comedy about two people who meet at a space convention was a recent selection at the SXSW Film Festival. When two people fall in love and one of them turns out to be a vampire, things get weird for a shy girl who just wants to find the right guy.

Rotten Tomatoes: No rating yet