She’s a demure country music cutie, and he’s a rap star with a stint at Riker’s under his belt. Obvious differences aside, however, their 2012 MTV VMA performances show that Taylor Swift and Lil’ Wayne actually have more in common than you may think. 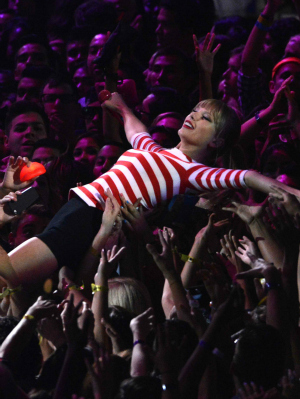 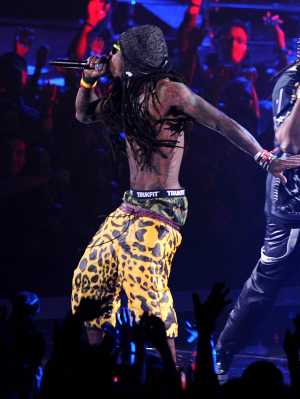 They know how to make an entrance

2 Chainz is on stage bleeping his little heart out when the cameras pan to neon shoes atop a skateboard cutting through the raucous crowd. The feet filling those fluorescent sneaks, of course, belong to none other than hip hop’s infamous tatted-up auto-tuner, Lil’ Wayne. Happily, Weezy made it to the stage without being clotheslined WWE-style by the overzealous arm of a fan — although that would have been rather amusing too — and everyone went wild. Taylor may not have rolled in on any X-Games-worthy sporting goods, but her sassy, solitary “sound booth” emergence made the audience just as giddy.

They can rock some Wayfarers, y’all

Not everyone is blessed with a head which looks good wearing classic Wayfarer sunglasses. Many tempt fashion fate by donning the shades, and many end up looking like extras from The Blues Brothers. But whadya know? Both Tay-Tay and Weezy sport the signature shades during their performances for a brief moment — and they both make that brief moment look good. Granted, they only get a pass for taking part in the ever-annoying celebrity trend of wearing sunglasses inside because the sunglasses were more of a theatrical prop here. The only other acceptable excuse would be recent cataract surgery.

They put their ass-ets on display

Taylor’s a pretty young thang, so it didn’t really come as any surprise that she wore something to show off her cute little figure. More specifically, the booty-hugging short-shorts she was strutting around in onstage showed the world one potential reason so many hunky men are hot for Tay-Tay. No buts about it, though (pun intended): we couldn’t help but zone in on another derriere out there — Lil’ Wayne’s. The rapper thoughtfully paired his drooping pants with a snug pair of boxers, lest MTV producers be forced to run a censor bar over his a** all night. But, here’s the thing… that a** was lookin’ mighty nice. Just sayin’.

They make for some entertaining clips of famous fans feelin’ it

Oh how we love those gratuitous and often awkward moments when the cameras pan in on a celebrity in the audience. The celeb, who often has some scandalous connection to the star on stage, typically smiles uncomfortably until the lingering lenses zoom out and on to someone else. Which is pretty much exactly how it went down when the cameras caught Taylor Swift’s matching-monikered ex, Taylor Lautner, during her performance of “We Are Never Ever Getting Back Together.” On the flip side, Lil’ Wayne’s performance brought clips of Rihanna, Katy Perry, Drake and other celebs momentarily forgetting the cameras were rolling and shakin’ what their mamas gave them.

“We Are Never …” may be about Jake Gyllenhaal >>

They go belly up… in a good way

Did crowd surfing come back in style? In the past, this sort of risky business was relegated to circa ’90s rock concert mosh pits teeming with tokers and headbangers. Well, leave it to Tay-Tay and Weezy to resuscitate this rowdy crowd-pleaser for their performances — both capped off their songs floating belly-up in a sea of what we can only assume were over-eager fans’ hands. The two even showed off different stage diving styles… perhaps there is an etiquette book for genre-specific stage diving techniques? Taylor’s slip into the crowd was quite subtle and ladylike (natch!), whereas Lil’ Wayne full out threw his shirtless body into the screaming masses. If we were in the business of handing out scores for celebrity high dives, we’d be giving these two 10s across the board for straight-up flair.