After being hospitalized while touring in Italy, Green Day’s Billie Joe Armstrong was not only strong enough to perform at the VMAs, but he was in his usual fiery, fighting form — speaking in support of Russian activist rockers Pussy Riot, who are now on the run from the government. 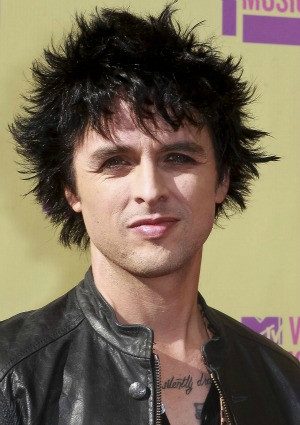 Billie Joe Armstrong not only fronted Green Day’s fifth MTV Video Music Awards performance Thursday night, but he was in feisty spirits just days after severe dehydration and the flu landed the 40-year-old rocker in the hospital, and forced the group to cancel a concert in Italy.

As Armstrong and his bandmates geared up for the performance, he expressed support of Russian feminist punk rockers, Pussy Riot. Members of the band were sentenced to two years in a penal colony for allegedly inciting “religious hatred” following a performance/demonstration in Moscow earlier this year.

Amnesty International, by way of MTV, has called their conviction a “bitter blow to freedom.”

In that video the bandmates — who have fled Russia since their conviction — thanked Green Day as well as Madonna, Bjork and the Red Hot Chili Peppers for their support.

So, while Green Day’s latest album may have mellowed a bit, it’s good to see Billie Joe isn’t backing down from his convictions — even if they’re not necessarily delivered via song.