Folks watching the MTV Video Music Awards didn’t see the smooch between Chris Brown and Rihanna, but a VIP camera set up by MTV was rolling when the volatile couple had their moment before the start of Thursday’s show. 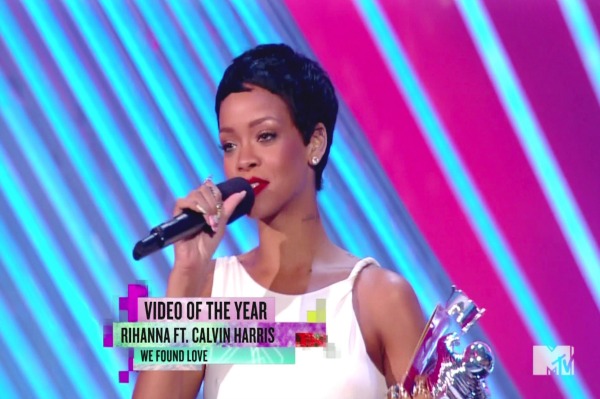 Rihanna and Chris Brown added fuel to the rumors that they’re on again, thanks to video captured of the pair kissing and embracing during Thursday night’s MTV Video Music Awards.

Rihanna, dressed in a long white gown with close-cropped hair, can be seen making a beeline for her ex as she walks toward her seat.

The former(?) couple share a hug and a kiss, and Rihanna playfully pats Brown on the head before walking away to find her seat.

The exchange comes just weeks after RiRi went on a whirlwind media tour about her relationship, professing her undying affection for the man who attacked her so severely in 2009 that it left her face battered, bruised and swollen.

While Rihanna was the big winner, securing “Video of the Year” honors with Calvin Harris for “We Found Love,” she still appears to be attracted to and tolerant of big-time losers like Chris Brown.