It’s a far cry from the glitter and glamour of Las Vegas, but for now, it’s home: Prince Harry has deployed to Afghanistan for a tour of duty in the war-torn country. 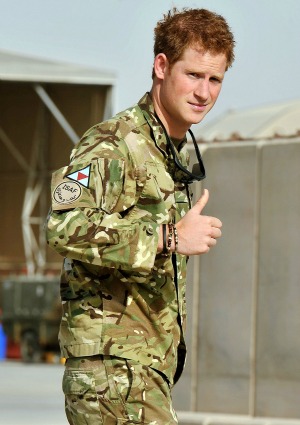 Fully dressed in uniform and not a pool table in sight, Prince Harry began his tour of duty in Afghanistan Friday morning as an Apache co-pilot gunner fighting against the Taliban.

A spokesperson for St. James Palace confirmed the third in line to the throne arrived in the Middle East overnight.

“He’s approached the deployment with a range of emotions like any other soldier and feels both pride and anticipation as he deploys for a job he’s trained for, for so long,” the spokesperson said.

Did Prince Harry ride the white pony in Vegas? >>

“Prince Harry, like any soldier, considers it a great honor to represent his country in Her Majesty’s armed forces wherever it chooses to deploy him.”

PS — Prince Charles is “immensely proud of his son,” the Palace said.

Royal Navy Captain Jock Gordon, Commander of the Joint Aviation Group, told the press, “Captain Wales, with his previous experience as a Forward Air Controller on operations, will be a useful asset.”

“He will be in a difficult and demanding job. And I ask that he be left to get on with his duties and allowed to focus on delivering support to the coalition troops on the ground.”

This is the second time the prince has been deployed to Afghanistan. His first tour, in 2007 as an armored reconnaissance troop leader, was cut short when his whereabouts were leaked by the media, putting the lives of himself and his comrades in danger. He specifically chose to change roles so he could go back.

“All these people talking these stories of ‘Oh, he’s been trained as (an) Apache pilot, he’s never going to see active service, he’s never going to get to the front line,’ you can’t train people and then not put them into the role they need to play,” Prince Harry said in March.

“For me personally, as I said, I want to serve my country. I’ve done it once, and I’m still in the Army, I feel as though I should get the opportunity to do it again.”

Prince Harry has spent the past 18 months training for his role, including a stint in the US.