The leaked stills from Season 4 of Glee have us on pins and needles … but which famous faces will join the Glee gang this go-round? Here are our picks for surprisingly harmonious celebs we’d love to see make cameos. 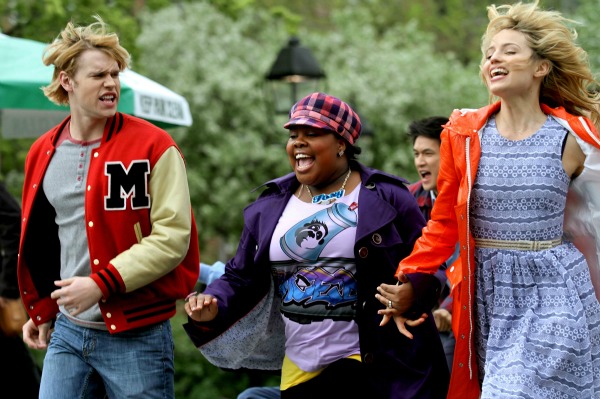 Okay, so this first one is a little obvi. In our defense, if Hugh himself has expressed an interest in bringing his talented booty to the show — and every woman in the free world wants to see him on the show — the idea merits mentioning until it comes to fruition. Any man who masterfully maneuvers from playing an adamantium-clawed mutant to winning Tony Awards could surely turn even the most die-hard musical hater into a Gleek.

He may be known to most as Sam Flynn from TRON: Legacy, but — in our minds — Garrett Hedlund’s most impressive performance to date was as karaoke cowboy Beau Hutton in Country Strong. While costar Gwyneth Paltrow may have gotten the lion’s share of the press for her singing chops, we’d buy Garrett’s album over Gwynie’s in a hot sec. Hedlund was so convincing as a twangy heartthrob, in fact, that dubious fans flooded search engines to see if he was pulling the classic Milli Vanilli movie magic.

Audiences were first introduced to James Marsden’s vocal stylings in 1996 through the short-lived ABC series Second Noah, leading to the incredulous jaw-agape expression typical when one thinks, “He’s that hot AND he can sing?” Yep, it looks like this kid won the genetic lotto. Following his 2001 – 2002 stint as Glenn Foy on the cult hit Ally McBeal, Marsden’s fate as a singing actor was sealed. He has since crooned on several sets, including Hairspray, Enchanted, and Death at a Funeral.

If you haven’t seen the circa-2000 flick Duets, run (seriously, don’t walk) to your nearest RedBox, local DVD emporium or Netflix queue and snatch it up ASAP. The movie’s a gem for many reasons, but it’s Last Resort actor Andre Braugher’s performance that hits the highest note. Playing a jailbird-turned-songbird-on-the-run (and duet partner to Paul Giamatti, who is also brilliant here), Braugher will bring tears to your eyes with his a cappella rendition of “Free Bird.”

Jessica Biel is gorgeous, has an a** that you can bounce a quarter off of and will soon walk down the aisle with hip-hop-pop hottie Justin Timberlake. As if that weren’t enough to make you want to chop off her pretty brown hair while she sleeps, it turns out the lone girl on our list can also carry a tune in a bucket. In 2008, she laid down a few tracks in a recording studio for her performance in the film Easy Virtue. She did a pretty decent job on stage in Guys & Dolls, too. But let’s be honest … we’re really just hoping she can convince future hubs JT — who has refused offers to be on Glee in the past — to make a cameo.