The cute British boys from The Wanted chat with SheKnows about their favorite fellow musicians and how they plan to celebrate if they win Best New Artist tonight at the MTV VMAs. 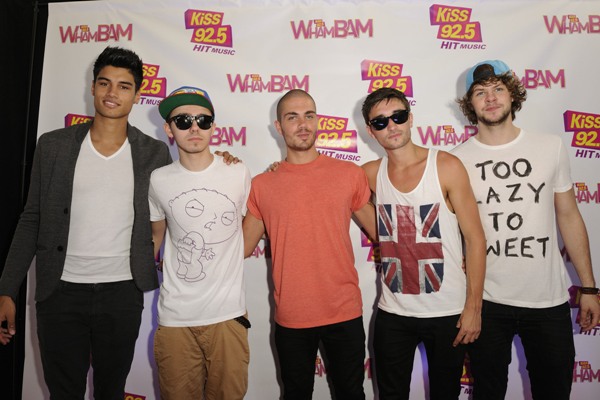 What better way to celebrate your birthday than with a VIP ticket to the Video Music Awards.

That’s how British boy-band heartthrob Max George is celebrating his, as he and his four bandmates of The Wanted make their first visit to the VMAs.

“It’s my birthday today,” George told SheKnows this afternoon at the 2012 NBA Baller Beats for Xbox 360 VMA Lounge. “If we don’t lose, we’re on the booze. Hopefully, afterwards everyone can be together and have a beer.”

The guys are nominated for Best New Artist tonight against One Direction, Carly Rae Jepsen, Frank Ocean and Fun.

“It’s very exciting,” Jay McGuiness told us as he and the guys tried out some headphones from Velodyne Acoustics.

But the VMAs aren’t the only exciting U.S. experience for the band. Tom Parker told us last night that they ran into John Mayer, someone they’d love to collaborate with. Other acts they’d love to team up with include Rihanna and Lady Gaga.

“Obviously, people like Rihanna or Gaga would be great because the revenue would be super,” said Nathan Sykes.

But tonight the boys are just excited to see some favorite singers.

When asked who they are most excited to see tonight, Siva Kaneswaran told us, “Alicia Keys, she’s an amazing singer. And Pink, she’s a great live act; she always brings an incredible performance.”

As for their favorite song, Max sang it for us, “Let’s go to the beach, beach,” a la Nicki Minaj.

Be sure to catch the band and all the other amazing acts on the MTV VMAs, tonight at 8/7c.