Cowell had thought networks had a “gentlemen’s agreement” not to directly compete with each other, but he is finding out that The Voice will do whatever it takes. 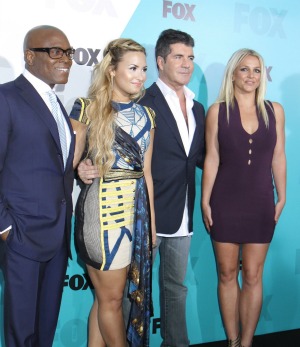 The long-awaited new season of The X Factor, with judges Britney Spears and Demi Lovato, is finally set to premiere next week, and one person involved in the show is not very happy. Simon Cowell today called out NBC for its decision to add a third night of The Voice to directly compete with The X Factor‘s season premiere.

“It is a spoiling tactic. They don’t want people to see this first episode,” Cowell said to Reuters. “I think it is mean-spirited, and I hope and I pray it backfires on them because this is one of the best shows we have ever made.”

Cowell of course never minded when his other show, American Idol, aired multiple times a week in competition with basically everything else on TV at the time. When Cowell left that show, he went to The X Factor, and he is obviously very proud of his new achievements. But it could be argued that The Voice has now taken an even larger part of American Idol’s original glory and audience than has The X Factor, thanks to Voice hosts Christina Aguilera, Adam Levine, Blake Shelton and Cee Lo Green.

“I am pissed off about it, because I think there’s a kind of gentleman’s agreement (not to go head-to-head),” said Cowell. “But we have to rely that the viewers will make the right selection.”

According to Reuters, the first season of Cowell’s show did not do very well, so he replaced two judges with Spears and Lovato. Just the news behind the shooting of the new season has caused enough buzz to get people watching, and there is no doubt The X Factor and The Voice are in direct competition.

Cowell mentioned more than himself, though, and said Spears would also be upset at the news. “Britney’s not going to appreciate the fact that Christina — who has been a bit of a rival — isn’t allowing Britney to have a night of her own,” Cowell told TMZ, according to Reuters. “She’s going to be devastated because she has put her heart and soul into this.”