Amy Poehler and Will Arnett are ending their union after nine years together. We don’t believe in love anymore. 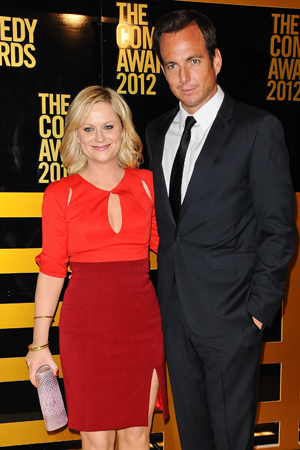 Sad news: After two kids and eight years of marriage, Parks & Recreation star Amy Poehler and her Up All Night husband Will Arnett are calling it quits. Their rep confirmed the news to People on Thursday, though no more information is available on the split.

Neither Poehler nor Arnett gave any indication there were problems. The pair often (playfully) poked fun at each other during interviews.

“I’m clearly the dumbest character in the movie,” Arnett told USA Today while promoting Blades of Glory in 2007. The pair played a brother-and-sister figure skating duo.

“You’re definitely dumber,” she deadpanned back.

However, those close to the pair said they couldn’t have been more in love.

“They’re the funniest married couple I know. They have such a similar sense of humor. They finish each other’s sentences,” pal Ben Stiller told USA Today at the time. “They work together so well as a couple. It’s fun to see their rhythm together, they play off each other so well. Will plays things straight but with an awareness of what’s funny. Amy is so good and polished as a live performer and has a funny, quirky sensibility.”

“They commit so hard, and they’ll do anything,” she said. “They’re both fantastic-looking people, but they don’t care. They’ll look goofy. Amy is this beautiful girl, but she’d as soon wear goofy teeth and fright wigs.”

This makes us so sad. Let’s hope they get back together.