The song could be about any one of Swift’s numerous exes. But many are saying that Jake Gyllenhaal is the culprit and that Swift left clues in the video. 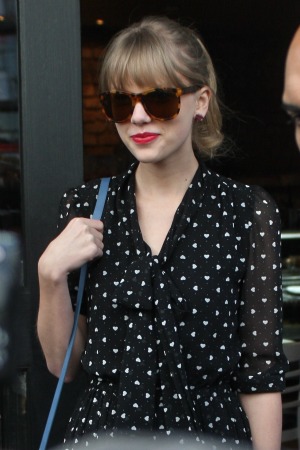 After all the speculation over the suspect in Taylor Swift‘s song “We Are Never Ever Getting Back Together,” we may finally have the answer. Many speculated it was about Joe Jonas, but he assured us it wasn’t about him. Swift’s other former boyfriends all made the list too, including John Mayer, Jake Gyllenhaal and Taylor Lautner.

A source told Us Weekly the song is “definitely about Jake.” Jake Gyllenhaal, that is. There have already been comparisons between Jake and Noah Mills, the actor in the song’s video, because of how much the two look alike. There are many other similarities, or perhaps clues, in the video.

“Swift’s video boyfriend wears a navy blue down vest that’s very similar to a jacket Gyllenhaal wore on one of their dates. Then there is the matter of the scarf that the video beau gives her, which reminds us of photos of Swift wearing Gyllenhaal’s scarf,” said the Huffington Post. “Then there is the bracelet Swift is wearing in the video, which looks suspiciously like the $100,000 one that Gyllenhaal was rumored to have given her for her birthday.”

Swift is not talking, and neither is Gyllenhaal. If the song is about him, you can be sure he knows about it since the couple was seen together after they had reportedly broken up, according to the Huffington Post. There is a good chance we won’t ever know for sure, and since Swift is happy now with new boyfriend Conor Kennedy, it looks like she is over it.