The MTV Video Music Awards, Snoop Dogg and Hot Pockets have a surprising connection. Take a peek inside the event’s swag bags, and allow us to introduce you to the rapper’s latest song, “Pocket Like It’s Hot.” 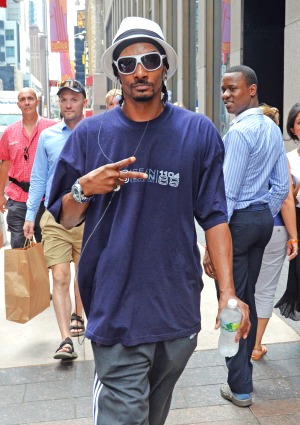 Hot Pockets have made their way into the MTV Video Music Awards celebrity swag bags, but we think there’s room for some frozen food love in the show too. Let Snoop Dogg take the stage and perform “Pocket Like It’s Hot!”

Yes, the man known to often have a case of the munchies has created a lyrical tribute to the Hot Pocket. A source told BANG Showbiz, “Snoop is obsessed with Hot Pockets and makes sure he has a stash of them at all times. He is a huge fan, and he decided to write this ode to them, which is similar to his hit ‘Drop It Like It’s Hot.'”

Snoop Dogg … errr, Snoop Lion … is more than “obsessed” with the microwavable bread pocket with the molten-hot middle; he’s a brand ambassador!

Snoop Dogg caught doing his thing in a Norway airport >>

Why are celebrities getting a box of Hot Pockets in their MTV VMA swag bags this year? Karen Wood, who designed the bags with Backstage Creations, explained, “Hot Pockets actually has a great brand ambassador, Snoop, and has downloaded all of Snoop’s songs onto an iPod, which will be given to each of the VMAs’ presenters and performers.”

It’s unclear if “Pocket Like It’s Hot” is included on the Hot Pocket iPods destined for the rich and famous.

Do you want to see Snoop perform his Hot Pocket ode at the MTV Video Music Awards?