Where there are cameras, there’s Ryan Lochte. The Olympic swimmer is still taking the media by storm. This fall, he’s landed a few jobs that will keep him busy and in the spotlight. 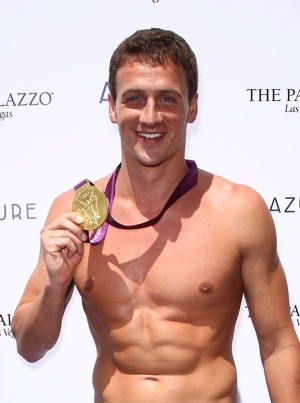 Ryan Lochte is putting his Olympic fame to good use. The Summer Games may be over but he’ll still be on our screens. The award-winning swimmer has several jobs on the horizon, all of which include being in front of a camera.

In August, it was confirmed that Lochte would appear on an upcoming episode of The CW’s 90210. He’ll play himself on the show and interact with some of the major characters. Now, a new report claims he’ll follow that up with a stint on NBC’s 30 Rock.

Lochte told New York Magazine‘s The Cut about his future TV plans. “I know I have the cameo for 30 Rock in the morning, and after that, E! And then Live With Kelly. So I’m all over the place.”

He recently landed a fashion reporting gig for E! to cover New York Fashion Week. It’s no secret Lochte has an interesting sense of style, but can he handle the high-end frenzy? He admitted he’s not fully prepared for what lies ahead.

Next for Ryan Lochte: The Bachelor or Dancing with the Stars? >>

“I’m sure I’m going to talk with them tomorrow when I meet with them and everything, and they’ll give me who I’m interviewing and what I’m going to say and stuff like that, so they’ll help me out a lot. I’m gonna be the one interviewing people, which is going to be totally weird. It’s going to be a different role, so I’m definitely gonna — it’s gonna be totally different. Usually I’m the one answering questions, not giving ‘em out, so …”