Even E!’s Fashion Police gave Britney Spears some rare props for “looking fierce” in a black leather, studded Versace dress on the cover of the new Elle. But inside the magazine, the singer says she’s still more comfortable in her sweats and will never be Kim Kardashian. 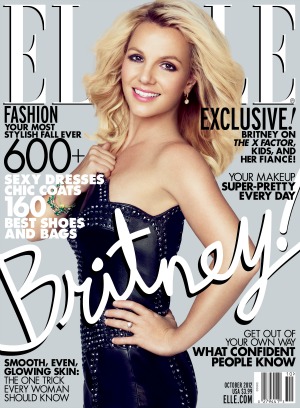 After more misses than hits on the fashion front, a fit Britney Spears is getting rave reviews, thanks to a “first look” at her new Elle cover and photo shoot.

The singer and The X-Factor judge sported a studded, strapless black leather dress, while inside a skinnier Brit got down to undies and a blue leather jacket in one shot, and a tiered Just Cavalli gown in another.

While a far cry from her Funyun-eating, barefoot-in-a-McDonald’s-parking-lot look, the low-key Brit is closer to the real thing than the one in the studded Versace dress.

“I love my jeans and my sweats — I’m really just a tomboy at heart, so it’s really hard for me to be like Kim Kardashian and be makeup-and hair-ready every time I go out of my house,” she tells Elle. “I’m not a believer in that, you know? On the other hand, when you do wear those sweats, you’re like, ‘Oh, God, I should step it up a notch.'”

That said, when she steps it up a notch, it’s definitely not to appease the peering paps.

“I guess I’ve been under the microscope so long that I don’t even pay attention to the nonsense anymore,” Brit told the mag. “I gave up getting upset about things people make up about me a long time ago.”

Fiancé Jason Trawick, who is featured in at least two photographs, started to dish on how the famous mom made the first move in their relationship, until an uneasy Brit apparently cut him off.

“OK, that’s enough information, sweetie,” she interrupted Trawick during the shoot. “It was sweet, just say that.”