If you can’t wait for the new Twilight movie, you’re in luck! Thursday’s MTV Video Music Awards will give you just enough to keep you going until November. 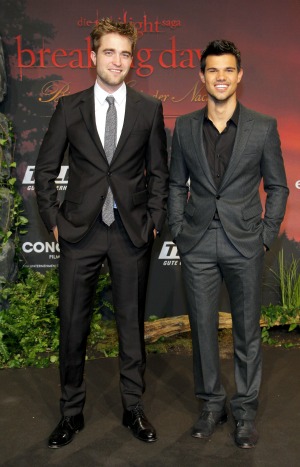 Fans who tune in to Thursday night’s MTV Video Music Awards will get more than they ever hoped for. The network today announced that the awards ceremony is now set to include an exclusive clip from The Twilight Saga: Breaking Dawn – Part 2. The clip will be a full 90 seconds. The film is still months away from its premiere date, and details have been somewhat scarce, so the new clip is valuable to Twilight fans everywhere.

Not only will the clip be shown, but the presenters of the clip might be just as exciting to the fans as the clip iteslf. MTV today announced that Robert Pattinson and Taylor Lautner have been added to the list of Thursday night’s presenters. The two will join “the cast of” the movie, although the statement did not mention Kristen Stewart, who is of course an important part of the cast.

In fact, no one has mentioned whether Stewart will be in attendance at all. Since the actress and longtime boyfriend Pattinson broke up, Stewart hasn’t been seen in public much, and many have wondered if the two exes would have to promote the movie together. It looks like in this case, they may not be doing the Video Music Awards together, which makes us think they may not be doing any promotion together for the movie either. But for Twilight fans, a 90-second exclusive clip may be all they need to keep them going until the movie comes out.

The MTV Video Music Awards have been moved up an hour, so they will be airing Thursday night, Sept. 6, at 8/7c on MTV. The Twilight Saga: Breaking Dawn – Part 2 is set to be released Nov. 16.