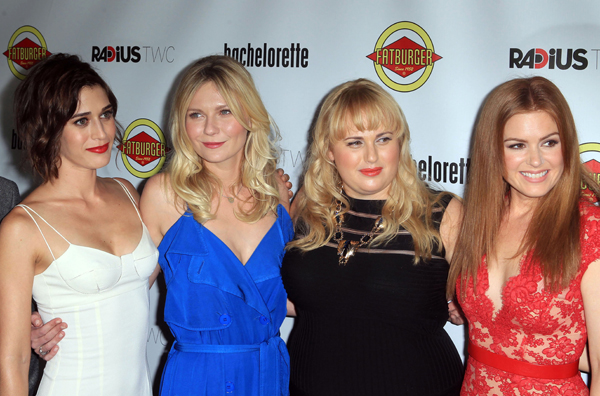 You know that awkward moment when you make a dirty joke on your Facebook page — say, about teabagging — and then your 65-year-old Aunt Kathy makes a clueless comment about the Tea Party? Yeah, that’s pretty much what happened on Wednesday morning, except Facebook was Good Morning America and your Aunt Kathy was host Elizabeth Vargas.

Here’s how it went down: Kirsten Dunst, Isla Fisher and Lizzie Caplan were talking to Vargas about their new film, Bachelorette, when Fisher started telling a saucy story.

“I went to the bathroom momentarily,” Fisher said, referring to a trip to a male strip club, “but when I came back, a gentleman had removed his briefs. She was on the stage, lying flat, and he was about to teabag her.”

Is Kristen Stewart a wild child like her new movie role? >>

“Are you serious?” Vargas grinned, clueless. “Wait, ‘teabag her’?”

She totally hasn’t heard of teabagging. Unfortunately, Dunst and the crew wasn’t about to explain it to her at 8 a.m.

“This is a little early [for that kind of story]” Dunst jokes back.

“What is teabagging?” Vargas asked.

“You can Google it later,” Dunst told the perky morning show host with a “there, there” knee pat.

We wish they’d televise it when Vargas does Google “teabagging” — we imagine there will be a lot of pearl-clutching and “oh my”s coming out of her office.

And if you don’t know what it is? Just go to UrbanDictionary.com and look it up — we assure you it has nothing to do with steeping green tea.