Snooki barely gave birth a week ago, but she’s already showing off pictures of baby Lorenzo on the cover of People. Squee! He’s adorable. 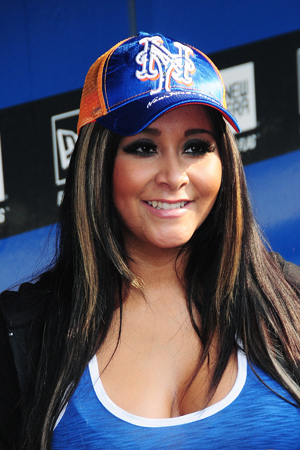 Jersey Shore is a lot of things: Gaudy, brash, loud… and lonely? Yes, according to new mom Nicole “Snooki” Polizzi. The pint-sized reality star was pregnant with her son, Lorenzo Dominic, while shooting the sixth and final season of the hit MTV show.

“It was definitely a little lonely,” she told People in a new cover story, mostly because everyone was out partying and she wasn’t. “Everyone was still going out and staying up late and I just wanted to go to bed at 8 o’clock. I didn’t want to do everything that everyone else was doing.”

Well, we’d rather hear she was lonely than dancing at Karma or something while pregnant.

She’s not too upset with her new alcohol-free lifestyle, though. “Everything changed,” she added. “The partying is long gone.”

It seems like she’s taken to motherhood quite nicely, too: Her Twitter feed is filled with quips about baby Lorenzo and fiance Jionni LaValle.

“Omg. Lorenzo just peed and pooped on us while we were changing his diaper. #amazing,” she wrote on September 1.

Apparently the pickle doesn’t fall far from the tree, either.

“I love dressing Lorenzo up in different outfits! He’s so cute in everything!! Def got his moms swag,” she added.

Yep, get ready for a new-and-improved Snooki. Will we get to see her be a mom on television? Yep! She’s currently filming the second season of Snooki & JWoww right now.

As for being a mom? There’s nothing better, she says.

“It’s a different kind of love that I never felt before,” she added to People.

45 mins ago
by Scarlett Harris