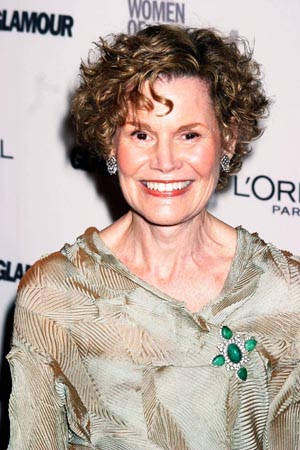 Christina Applegate had it, so has Sheryl Crow and Giuliana Rancic. Now? Judy Blume has it. We’re talking about breast cancer — and the 74-year-old author of beloved books like Are You There God? It’s Me, Margaret revealed her diagnosis in a poignant post on her blog.

In the post, titled “!@#$% Happens,” Blume details how her “dream summer” turned into a scary nightmare.

Suzanne Somers wants everyone to see her new boob >>

“We were supposed to leave for five weeks in Italy on July 29 — four of those weeks would be spent at an artists’ colony housed in a castle in Umbria where I was hoping to finish my new book. A castle! Sound too good to be true? Uh huh…,” she wrote.

Instead, she visited a radiologist on June 12 who recommended she get a biopsy.

The biopsy report came back a few days later while I was with my GYN in her office (a long standing appointment). It was good that I wasn’t alone and that she, who has been my doctor for seventeen years, could explain it to me. Very early. Very small. Well differentiated. All good news. But it was invasive ductal carcinoma.

Wait — me? There’s no breast cancer in my family (recent extensive genetic testing shows no genetic connection). I haven’t eaten red meat in more than 30 years. I’ve never smoked, I exercise every day, forget alcohol – it’s bad for my reflux – I’ve been the same weight my whole adult life. How is this possible? Well, guess what — it’s possible.

She underwent a mastectomy on July 30 and is doing well, she added.

Now it’s one month post surgery — I’m still in NY and feeling stronger every day, walking a couple of miles in the park each morning and going out to early dinners with George. Have seen movies and a couple of plays, as you know if you follow me on Twitter.

I’m able to read again without falling asleep. Which doesn’t mean I don’t need a nap every day. I’m not working on my book yet (have just been given permission to type an hour at a time with arm exercises in between) but I’m thinking about getting back to it after Labor Day, kind of like starting school.

We love her take-charge attitude about her disease. Frankly, we don’t want to think about a world with Judy Blume not in it, so we’re hoping her cancer is gone for good. Best wishes for a quick — and full — recovery, Judy!