Kris Humphries poses between two hot women on the cover of Page Six Magazine, and talks Kim Kardashian in the new issue hitting newsstands tomorrow — and surprisingly, he is more than a little gracious. 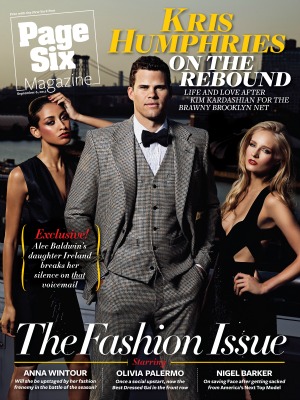 Kris Humphries is not letting Kim Kardashian and Kanye West walk all over him. Currently embroiled in a divorce drama that has lasted far longer than their 72-day marriage, Humphries is remarkably sensible about the whole thing. He sat down with Page Six Magazine for a chat about where he’s been and where he’s going.

“Some people just make bad decisions and you just know it’s not what’s meant to be,” he said of his short-lived marriage to Kardashian. “The decisions that you make, you obviously make for a reason. Everything in life for me has just been moving forward.”

On being booed during a game at Madison Square Garden:

“I got to experience the Knicks crowd, and that was, uh, pleasant. You know, it motivated me.”

“I have a sense of humor. It’s whatever, I joke around. It was what it was. Take from it what you will.”

On playing the Knicks Nov. 1 for the Brooklyn Nets’ first game:

“It’s going to be unbelievable. I think as players we have the pressure to win and entertain the fans. The first game, it’s going to be crazy. There will definitely be a lot of s**t talking. It’s always been a rivalry, and we’ll see how it’s going to change with us being so close.”

On his relationship with his new boss, Nets part-owner Jay-Z:

“I say hi when I see him. It’s been great having him involved, because he is Brooklyn.”

On starting a family:

“I think everyone wants a family of their own one day. You’re at the point in your life when all of your friends are married and stuff. For me, at least, everyone runs their own race. You can’t put a timetable on it.”

On his personal style:

“I think about my style as, like, London meets Italy-edgy but, you know, classic at the same time. I’ve been working with stylists. You don’t want to be looking like you just came out of a Big & Tall shop, you know.”