Michelle Obama gave a rousing speech in support of her husband, President Barack Obama, last night at the Democratic National Convention. He totally owes her some bling. 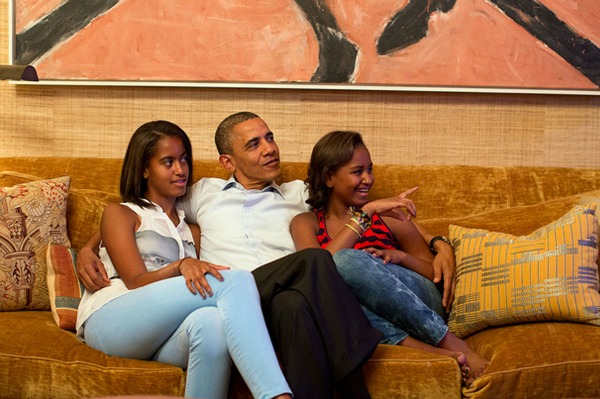 The First Lady can be a powerful political tool or a major deficit. In Michelle Obama‘s case, she is the ultimate secret weapon.

As the President and their two daughters Sasha and Malia watched from the White House, the First Lady gave an inspiring speech at the Democratic National Convention last night, highlighting key differences between Barack Obama and Republican candidate Mitt Romney — namely, that the Obamas exemplify the American dream by having started from nothing and worked hard to achieve their dreams. Without saying so directly, it was a key dig at the Romneys, who were born with silver spoons in their mouths.

“I loved Barack just the way he was. You see, even though back then Barack was a senator and presidential candidate, to me he was still the guy who picked me up for our dates in a car that was so rusted out, I could actually see the pavement going by in a hole in the passenger side door,” she said.

“He was the guy whose proudest possession was a coffee table he’d found in a Dumpster, and whose only pair of decent shoes was half a size too small.”

Plaque marks the site of the Obamas’ first kiss >>

“…Barack and I were both raised by families that did not have much in the way of money or material possessions, but who had given us something far more valuable: their unconditional love, their unflinching sacrifice, and the chance to go places they had never imagined for themselves.”

“Like so many American families, our families weren’t asking for much. They didn’t begrudge anyone else’s success or care that others had much more than they did. In fact, they admired it. They simply believed in that fundamental American promise — that even if you don’t start out with much, if you work hard and do what you are supposed to do, you should be able to build a decent life for yourself and an even better life for your kids and grandkids,” she explained.

The First Lady went on to explain some of her husband’s triumphs for the middle class, like the Lilly Ledbetter Fair Pay Act, cutting taxes for small businesses and health care reform.

“And he wants everyone in this country to have the same opportunity no matter who we are, or where we are from, or what we look like, or who we love.”

“And he believes that when you’ve worked hard, and done well, and walked through that doorway of opportunity, you do not slam it shut behind you. You reach back and you give other folks the same chances that helped you succeed.”

Her words were met with explosive applause and chants of “Four more years!”