Readers and critics have been waiting four years for Junot Diaz’s follow-up to the much acclaimed novel, The Brief Wondrous Life of Oscar Wao. Although vastly different in format and length, his new collection of linked stories, This Is How You Lose Her, is absolutely worth the wait. 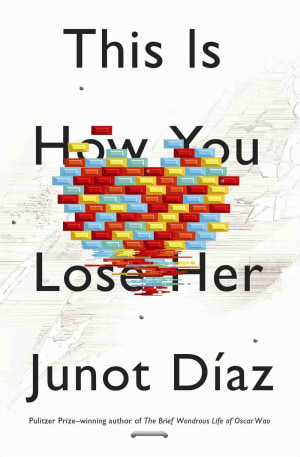 Junot Diaz rose to fame when his novel The Brief Wondrous Life of Oscar Wao won the Pulitzer Prize for fiction in 2008, along with a bevy of other prizes. His newest book, This Is How You Lose Her, is a set of connected but non-chronological stories about the life of Yunior, a young Dominican man living in the Northeast United States who does not do well in relationships.

The depth Diaz imparts through little snippets of Yunior’s life is why This Is How You Lose Her is our Red Hot Book of the Week.

About This is How You Lose Her

Many readers avoid short stories because just as they become involved in a character’s life, the story changes. This is somewhat less of a problem with linked stories, because you either return to characters or they pop up in other characters’ stories from time to time, but there is still not the cohesion achieved by a novel. Or at least, that is often the case.

Diaz, however, paints a full and complex picture of his main character, Yunior, despite the fact that the snapshots we see of Yunior’s life are not laid out in chronological order.

You glance at the offending passages. Then you look at her and smile a smile your dissembling face will remember until the day you die. Baby, you say, baby, this is part of my novel. This is how you lose her. — Page 48

Yunior’s not really a bad guy, or so he tells us in the first few lines of the opening passage of This is How You Lose Her. It is to Diaz’s credit that the reader is able to continue to believe this about Yunior, despite mountains of evidence to the contrary. You see, Yunior has a bit of a problem with romantic relationships; he does not do well with the monogamy aspect. Time after time, Yunior sabotages his relationships by cheating on his partner, sometimes to extents that seem to be overkill.