Has Hollywood jumped the shark with refabbed fairy tales, or is Hansel and Gretel: Witch Hunters something today’s audiences want to see? 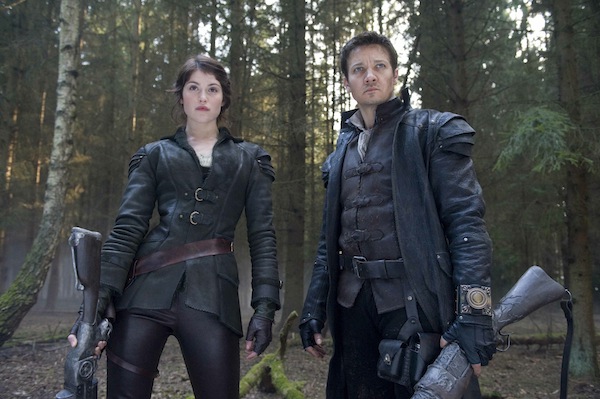 This summary is essentially the premise of the newest dark take on a classic fairy tale, Hansel and Gretel: Witch Hunters, starring Jeremy Renner and Gemma Arterton.

Man Candy Mondays: Jeremy Renner is a tough guy who makes us weak >>

Apparently, the story opens 15 years after the “gingerbread house incident” scared two kids out of their wits. They’ll never run away from home again. But now, Hansel and Gretel are no longer pigtailed and scruffy — they are a man and woman ready to hunt down the witch who terrorized them and make her sorry she ever saw a breadcrumb.

Two kids with a serious grudge

When our two strong and beautiful heroes find out there’s more than one person with an evil mind in the forest, they decide to stop at nothing to become the best sister-brother witch-fighting team in the world.

Armed with bow and arrow and martial arts skills, they head into the forest to kick some witch booty. Our Bourne Legacy boy, Jeremy Renner, plays the striking Hansel, while newcomer Gemma Arterton plays gorgeous Gretel. Arterton got her start in Prince of Persia and Quantum of Solace.

Real Moms Guide: A fairy tale comes to life on the big screen >>

Hansel and Gretel: Witch Hunters is written and directed by Norwegian filmmaker Tommy Wirkola and comes out in theaters in Jan. 2013.

If Snow White and the Hunstman, the latest in fairy tale films turned into dark action flicks, is any evidence of how Hansel and Gretel will do, there’s no telling what audiences will think of this retelling of a classic fairy tale. We’re curious to know what you think.

Do you want to see another refabbed fairy tale?