Betty White is still going strong at 90 years old, not only in her acting career but possibly by lending her beloved voice to the DNC! One young starlet in particular idolizes the Golden Girls actress, and dreams of being “the next Betty White.” 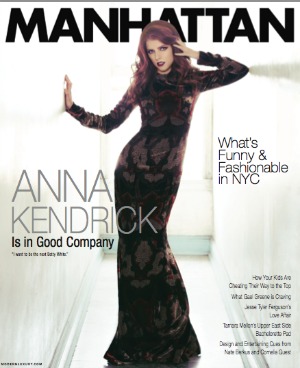 Anna Kendrick has her sights set on Betty White‘s career path, specifically in the longevity and humor departments. Insisting she’s not interested in flash-in-the-pan fame, the young actress aims to follow in the Golden Girls star’s footsteps.

At just 27, Anna Kendrick is a far cry from the nonagenarian status Betty White has earned, yet longevity is highly admirable in the budding star’s book. Covering the latest issue of Manhattan magazine, the Twilight and 50/50 actress explains why the woman being called upon to speak at the 2012 Democratic National Convention is her role model.

“I’m not thinking, ‘In the fall I need to make this kind of movie,'” Anna Kendrick told the magazine of taking her film roles in stride with her personal life, not being so brash as to plan 10 years ahead. “It’s more, ‘I want to make this recipe for Thanksgiving.’ I’m thinking about decorating my house for Christmas, and whipping out my Martha Stewart crafting crap.”

With a penchant to push herself however hard it takes, the young lady we’ve seen as Bella’s friend in Forks and psychiatrist to the cancer-stricken added, “I want to be sharp and funny at 80. I want to be the next Betty White.”

One thing the unlikely pair have in common besides acting? Kids of their own aren’t in the cards.

Though Betty White became stepmom to three children when she married Allen Ludden in 1963, she never had children of her own. Anna Kendrick, meanwhile, revealed she plans to go the “childless route” to SheKnows while promoting What to Expect earlier this year.

Do you think Anna Kendrick has what it takes to be “the next Betty White”?