It’s Labor Day weekend and you have a new baby at home: What do you do? If you’re Scott Disick, you hang out with half-naked women. 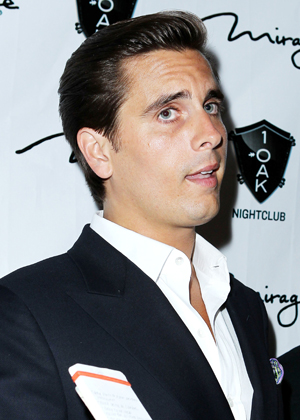 We don’t know how (or why) Kourtney Kardashian puts up with boyfriend Scott Disick, mostly because he prefers to party rather than stay at home with her and the kids. Case in point: The 29-year-old opted to party with the Pussycat Dolls in San Diego on Sunday night rather than stay home with his family.

Sure, guys need time away, too — but with half-naked women? Uh, no.

According to People, Disick arrived in a Mercedes Maybach wearing a custom Astor & Black suit (of course.) The reality star drank Bud Light and “appeared relaxed as he chatted with friends and posed for photos with fans,” a spy told People.

Don’t worry, though: He was back home Monday for a little park time/photo opportunity with Kourtney and the kids. Cameras spotted Kourtney kissing baby Penelope as Scott looked on. Mason was presumably off playing in the Calabasas park.

Apparently, though, things are going well between Kourtney and Scott. However, they’re still sleeping in separate rooms.

“I basically live the life of an 80-year-old,” he told the ladies of The View in June. “We just skipped to that part quicker. Where you always saw your grandparents in two beds in one room. I am very mature. It’s really just you get into a habit and then it just becomes your normal thing.”

“We’re good right now with how things are,” she told US Weekly recently of why they aren’t engaged. “We’re just trying to figure out our new life with two kids.”

Well, we’re glad she’s happy with him — we sure wouldn’t want him!