The actress and her hockey player boyfriend have been dating for over four years. At a surprise dinner Sunday, they told family and friends they’d be making it official.

Related story Happy Endings movie: Where the show left off and what needs to happen next 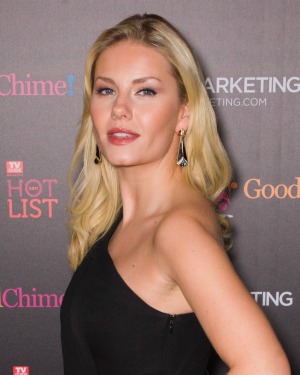 According to the Toronto Star, the couple invited around 35 friends and family to the dinner at the New Glasgow Lobster restaurant on the island. None of the guests knew there was an ulterior motive to the dinner. “Screams and applause could be heard coming from a private dining room after the couple broke the news,” said the newspaper.

Cuthbert and Phaneuf have been dating since 2008. They’ve been spending the summer in an ocean-front home on the island and, according to the Toronto Star, have been regulars at the restaurant. The servers remarked to Nickelson about the size of Cuthbert’s engagement ring.

“They said it was pretty huge,” Nickelson told the Star.

At age 27, Phaneuf is entering his third year as the captain of the Toronto Maple Leafs. Cuthbert, 29, was born in Canada and raised in Montreal. She won a Gemini Award in 2001 for her role in the movie Lucky Girl. According to the Internet Movie Database, the award is Canada’s version of the Emmy Award. Cuthbert’s first role was in the TV show Are You Afraid of the Dark in 1996. In 1999 she became a regular on the series.

In 2001, Cuthbert won the part most Americans know her for, Jack Bauer’s daughter Kim on the series 24. She has since starred in such movies as Love Actually, The Girl Next Door and House of Wax. She currently stars on the show Happy Endings.