Before Katie Holmes, there was Nazanin Boniadi, a woman who said she was selected to be Tom Cruise’s girlfriend by the Church of Scientology. When the relationship didn’t work, Boniadi revealed her story. 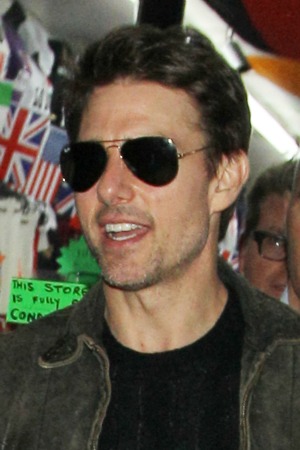 When Katie Holmes announced she would file for divorce from husband Tom Cruise, there was talk that she had been selected as his wife by the Church of Scientology. And in the new issue of Vanity Fair, the magazine looks into the process, including the story of a woman who dated Cruise from 2004 to 2005.

“According to several sources, the organization devised an elaborate auditioning process,” said Vanity Fair, “in which actresses who were already Scientology members were called in, told they were auditioning for a new training film, and then asked a series of curious questions including: ‘What do you think of Tom Cruise?'”

Vanity Fair writer Maureen Orth dug into the topic and found that both Nicole Kidman and Penelope Cruz had done things to displease the church — and therefore displeased Cruise. Orth found that Nazanin Boniadi, an Iranian-born Scientologist who was raised in London, was selected to be Cruise’s girlfriend in late 2004.

“Initially she was told only that she had been selected for a very important mission,” said Orth. “In a month-long preparation in October 2004, she was audited every day, a process in which she told a high-ranking Scientology official her innermost secrets and every detail of her sex life. Boniadi allegedly was told to lose her braces, her red highlights, and her boyfriend.”

She finally met Cruise in November 2004 and realized what was happening. They dated for a few months, and Boniadi said she was in love with Cruise. But his affection was too much for her, and any time she upset him, he would report her to the church. When the relationship ended, she eventually told her friend what had happened and was punished for that too.

“According to the knowledgeable source, the friend reported her,” said the Vanity Fair article. “Boniadi’s punishment was to scrub toilets with a toothbrush, clean bathroom tiles with acid, and dig ditches in the middle of the night. After that she was sent out to sell Scientology founder L. Ron Hubbard’s Dianetics on street corners. Boniadi and her mother are no longer involved in Scientology.” The church denies the claims.

You can read the whole story in the October issue of Vanity Fair magazine.