We don’t know… yet. But after visiting with Chris Scott for just a couple of minutes, you’ll find yourself rooting for this Emmy-nominated choreographer. Here he gives us the straight talk on where he was when he learned about his Emmy, dishes about an embarrassing high school memory and reveals for the first time if he’s Team Peeta or Team Gale… 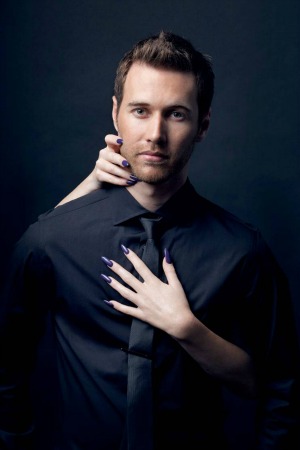 Kat: Let’s get the big stuff out of the way. You’ve been nominated for an Emmy for two numbers, “Misty Blue” and “Velocity” that you worked on for So You Think You Can Dance. Where were you when you found out? Even if you were in the bathroom, you have to tell us.

Chris: I was actually in bed. The night before I had a number that had done well, but another that [didn’t]. I was super depressed. I just wanted to curl up and die. I went on Twitter to see “how much are people bashing me right now?” and the first tweet I read was “Congratulations Chris Scott on Emmy nomination,” and I was like, “What??”

Kat: Did you ever think when you signed up for tap lessons at Hollywood High that it would lead to an Emmy nomination?

Chris: Never. My mom joked about it when we were younger. Every time she’d pay for a class, she’d say, “All I’m saying is when you get nominated for an Emmy, or an Oscar, I’m going to be there.”

Kat: I say that stuff to my kids all the time. “Don’t forget Mommy when you’re rich and famous.”

Chris: (laughs) Sure enough. I’m getting her a ticket. She’ll be there.

Kat: Speaking of Hollywood High, how about sharing a memorable/embarrassing experience? And if you have to throw someone who is now a celebrity under the bus, it stays between you, me and throngs of SheKnows readers.

Chris: Definitely. At that point, the only celebrity who was going to Hollywood High was Ray J, and we know his embarrassing story. Embarrassing moments? God I have so many. I literally turned into a theater nerd. I went in like a cool, hip-hop head who loved sports and they turned me into a theater nerd and I guess I’m glad now.

Chris: I went to an audition for the play Rumors at my high school. I went in there, had never acted before in my life and they said to just bring a comedic monologue. So I went in there and I said, “Can I do one that has adult language?” and they said that was fine. In front of high school teachers, I started doing Eddie Murphy’s standup routine from Delirious. And nobody laughed. I’m sitting there cursing, saying the dirtiest things to my teachers, and I’m sweating, thinking, “Why am I doing this, why am I doing this?” At one point, I stopped and said, “I have another one.” Which was no better. It was about a pimp making a movie with aliens. It was bad. I ended up getting one of the lead roles. I still get a little nauseous thinking about it.

Kat: They probably admired your guts.

Chris: I was thinking, “Please laugh. Just one time guys.”

Kat: Like most forms of art, dance lends itself to interpretation. When I watched Misty Blue, to me it felt like a man and woman who had drifted apart, and the moves seemed to vacillate between sexy, which I interpreted as an attempt to rekindle their relationship, and robotic, which seemed to represent the staleness of their romance. How far off am I, how much did I miss? And feel free to laugh uproariously at my interpretation.

Chris: No, that’s actually pretty dead on. It was definitely a routine about a rekindling and reigniting a flame that’s burned out. But I love the interpretations of dances of things that I didn’t necessarily plan. It’s so cool to me. The robotic movements weren’t consciously put there to indicate that, but it’s so cool to me that you got that. I did that style of dance because to me it’s kind of stiff, really tense and it comes from a passion or desire kind of thing.

Kat: Oh, well thank you for not laughing. I really appreciate that.

Kat: Unlike some other mediums, you have to turn your vision over to others. Is it difficult to relinquish that control? Is it particularly heartbreaking if a dancer makes a mistake or screws up?

Chris: Yeah. That’s the hardest part of the job at the end of the day. Being a choreographer, we plan a way that it should look on screen or on camera and you just don’t have any control over how it’s going to look on camera. It sometimes makes you insecure about doing something because you think “They’re not gonna be able to shoot it like that or catch it like that, or they’re gonna cut it up a little bit and ruin it,” so you play it safe sometimes. You learn the tricks of the trade to make sure something gets in there. And when you see someone make a mistake, you know the dancer is going to beat themselves up about it. I don’t get mad. People work so hard and put so much into this. My heart just kind of breaks for them.

Kat: I watched Chapter 1 of The LXD, a web series you founded, which is incredibly entertaining. In

that episode, a boy can do amazing dance moves as a kid. How does a mom distinguish real talent from normal kid stuff?

Chris: I think what I’ve noticed is it’s not the talent, but the raw talent. Sometimes it makes these kids stand out. When kids have fallen in love with it. If they’re dancing in their room, if they can’t do without it. I was in high school, and in any elevator I would start to tap dance and my sister would be like, “Mom, make him stop.” Any store with a wooden floor, I’d start tap dancing and even my mom would be like, “Not right now Chris.” She’s the most supportive mom ever, but…

Kat: Like funerals are not an appropriate place to get up and start tap dancing…

Chris: Oh, God, I really owe some people an apology.

Kat: I got totally sucked in by that episode. What do you think it is about a dance-off that gets our hearts pumping and is so emotional? I felt like I was watching Rocky all over again.

Chris: For one thing, Jon Chu has a very specific mindset and way of shooting dance that I’ve found pretty rare. He really understands how to tell a story through dance. I think that’s why a lot of people connect with LXD even though it’s kind of superheroes and kind of out there. There are very honest moments and characters.

Kat: I think it would be so cool to take that sort of theme to Vegas, not to cheapen it any way, I mean like a Cirque Du Soleil kind of thing.

Chris: We have had talks like that, to do a stage show, which was never the plan. But after the success of So You Think You Can Dance, we’re always thinking of touring, of doing a Vegas show, movies, if Jon could just stop doing his giant films!

Kat: You were also a street performer in Los Angeles. That takes some stones. How do you get up the nerve to start busting a move in front of random strangers?

Chris: Oh, man. I was lucky. I pretty much learned how to dance from two dance friends, the twins, John and Sean Scott. They’re tap dancers — they were street performers from when they were little kids. They took me under their wing and we’d take the bus to Santa Monica and Third Street and I’d literally do training all day there. So it was kind of like no one was watching, because I was training.

Kat: It’s got to be tricky coming up with new material all the time, so what inspires you?

Chris: It depends. Like LXD the dancers always inspire me. You meet someone like Chad and it becomes about the specialties of the dancers. I’m learning in my career, you can’t please everybody. That’s a really hard thing for me because I really wish I could. Sometimes in my mind, I’m thinking, “Oh, let me do this because people will love that, let me do fun stuff.” But I love doing more beautiful tones and stuff. Another thing that I really believe in and try to promote — what I feel one of my purposes is in the choreography world — is to show how beautiful street dance is. I feel like people look at it like, “Oh, that’s so cool. The tricks are so raw.” But it’s really one of the most beautiful types of dance in the world. Like, we know ballet is beautiful. Jazz and contemporary can be really beautiful. I just really want to show how beautiful street dancing is. 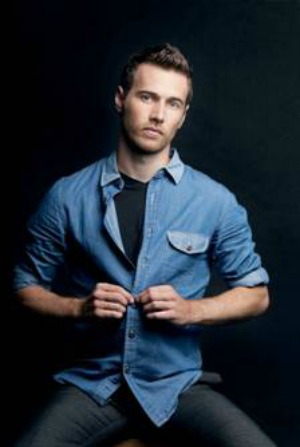 Kat: Readers love fun facts, so can we go there for a couple minutes?

Kat: What’s your favorite pastime, not related to dance?

Kat: So you play pickup ball on the weekends, stuff like that?

Chris: I used to a lot more. Now there’s a risk factor. I have a career in dance — it’d be really stupid if I sprained my ankle playing basketball — but I love it with a passion. It’s what I grew up doing.

Kat: What book is on your bedside table right now?

Chris: No, actually, this is kind of a guilty pleasure but I just finished the Hunger Games trilogy. I love The Hunger Games. I’m Team Peeta all the way.

Kat: You’re officially outed as a Hunger Games lover. Tell us something that is not common knowledge about you or your childhood that might surprise us. This can be anything from being double-jointed to having a phobia of some kind… stuff like that.

Kat: That’s kind of challenging for a dancer, isn’t it?

Chris: Absolutely. I had to work on Step Up 4 on the wall — I went up there because I can’t keep asking dancers to do something if I don’t know what it feels like because that’s not right. So I went up there and I had like little baby calf legs, shaking, like “Oh my God. What am I doing up here?” I’m also afraid of the ocean.

Kat: Good thing you dont live in LA or anything, or that could get weird…

Chris: (laughs) I know, I’m getting over that. I can go surfing now. Stuff from childhood — I went to see Pulp Fiction when I was a kid in the theater, I was like 10. I look back — I felt like I was an adult.

Chris: (laughs) Dusting my Emmys. That’s a really good one. Or Oscars would be really cool too.

Kat: Even better, watching someone dust your Emmys and Oscars, because doing it yourself would be gauche.

Kat: Have you done anything like that to date?

Kat: Directing dancers sort of speaks to what we talked about earlier with turning your vision over to others and relinquishing control. So if you choreograph something and get to direct it, then you kind of get to have your cake and eat it too, right?

Chris: Definitely. I just choreographed a movie with Jeffrey Hornaday, the director who choreographed Flashdance — he’s like a legend like a Kenny Ortega in that sense — and it was just so different, because he gets it. I’m there with him on the cameras and we’re talking about it, angles and edits. I want to be like that as a director.

Kat: When you win your Emmy, will you come back and visit with us?

14 hrs ago
by Araceli Cruz