Heidi Klum may be accused of having an affair with her bodyguard, but she’s refusing to resort to low blows. The model speaks in response to Seal blabbing to the press about who’s been “fornicating” with whom. 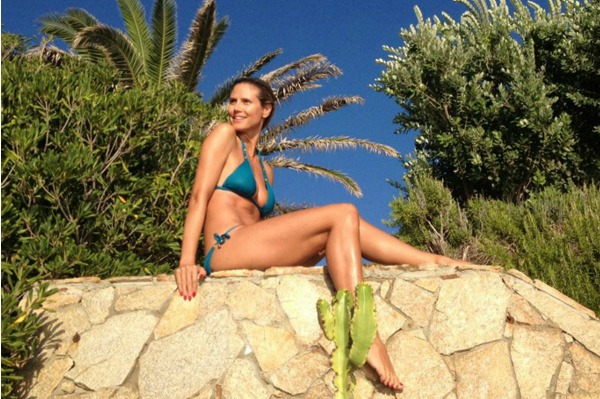 Heidi Klum hasn’t exactly copped to “fornicating with the help,” as her estranged husband Seal so eloquently put it, but she does have a message for him: This hot bikini bod is so over you!

“I cherish all of the great memories Seal and I created together over the years,” Heidi Klum said in a statement to People over the holiday weekend.

“Our separation was based on issues between the two of us,” she continued. “Seal has moved on and so have I. My priority has and continues to be protecting and providing for our children.”

The rare statement on their personal affairs comes after the singer spoke to TMZ in an airport interview about recent photos depicting Heidi Klum snuggled up to her bodyguard, Martin Kirsten, while vacationing in Sardinia. “That’s what happens when two people separate, they move on and generally meet other people in their lives,” Seal said, sounding realistic about the turn of events before adding in a jab.

“I certainly don’t expect Heidi to all of a sudden become a nun… Whilst I didn’t expect any better from him [the bodyguard], I would prefer Heidi would have shown a little bit more class and at least waited until we separated first before deciding to fornicate with the help, as it were.”

In case Seal has forgotten just how gorgeous his soon-to-be ex-wife is, Heidi Klum has been busily posting bikini photos from her summer vacation — the one she’s spending with bodyguard Martin Kirsten — to Twitter. Along with the photo seen above, Heidi Klum writes, “Another beautiful day in Sardinia!”

Is taking the high road (along with a few hot bikini shots) the best form of revenge for Heidi Klum against Seal’s “fornicating” comments?

36 mins ago
by Scarlett Harris