The granuloma that first silenced John Mayer last year won’t go away, with last week marking the second time since October that the singer has gone under the knife to remove the debilitating mass near his vocal cords. 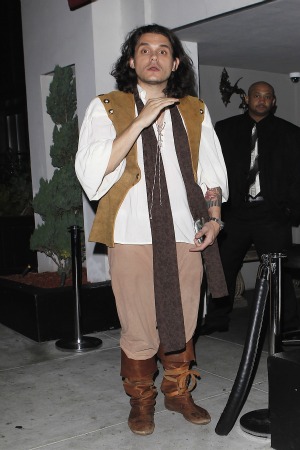 John Mayer’s doctor has once again ordered the singer to put his vocal cords on ice, after a granuloma in his vocal cords had to be surgically removed for the second time since October.

In March, a month after Mayer revealed his first single since throat surgery, the singer told fans that the inflamed growth had returned.

While his live performances were cancelled at the time, it looked like Mayer remained back in the studio — his album, Born and Raised, was released in May.

This time around, it appears Mayer’s doctor — who also helped Adele overcome her vocal hemorrhage — isn’t messing around. At all.

A representative for Mayer told CNN.com that Mayer has been banned from singing until next year — a doctor’s order that the singer himself revealed to fans on his Tumblr.

“Well, here I am,” Mayer wrote. “Silent for the next few months, no singing for probably six, but all signs point to this being the last step in getting to perform again. Back to notebooks and iPad to communicate for the time being. Zen living at its finest… so if you see me out and about and I don’t answer you when you say hello, I’m not ignoring you. Promise.”

Back in March when the growth returned, Mayer told his fans the granuloma is tough to treat because of its location — it’s in a spot where vocal cords constantly hit each other.

Extensive treatment and rest is the only real cure.